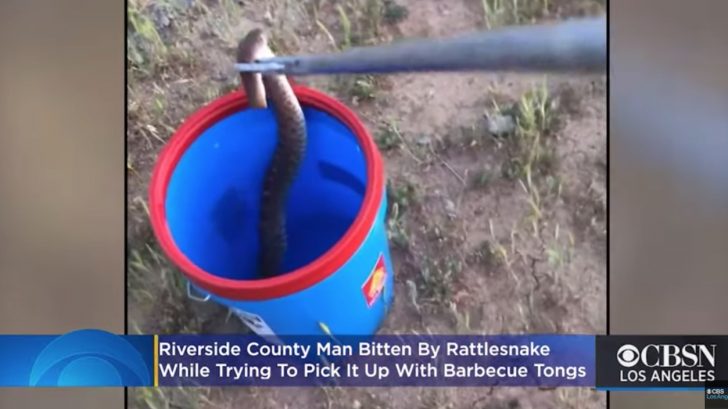 A man in Riverside, California was trying to protect his children from a rattlesnake by attempting to remove it from the area with barbeque tongs and was bitten on the left hand near his thumb.

“A coiled rattlesnake can strike the length of its body and the bites are painful and, in some rare cases, fatal,” Animal Services Commander Chris Mayer said on Riverside County Animal Services.

It happened in the Temescal Canyon area and the man was immediately transported to the nearest hospital. Firefighters from Riverside County Fire Station No. 64 said they responded to the snake bite call at about 5:15pm and drove out to the property on Elderberry Lane in Sycamore Creek.

An animal services officer removed the snake while firefighters provided treatment to the victim before transporting him to the hospital by ambulance. Officer Mike McGee said the rattlesnake had to be euthanized because they were unable to safely release it in the area.

“We try to release rattlesnakes within one mile of where we remove it from, but it was highly likely this snake might end up in one of the adjacent homes again,” McGee said, according to Riverside County Animal Services. “I didn’t believe a routine release would be safe this time.”

Chris Mayer was informed that the man was trying to get it away from his children when he was bitten. He advises that people never use cooking utensils when dealing with dangerous reptiles.

Video Report On The Snake Bite Below