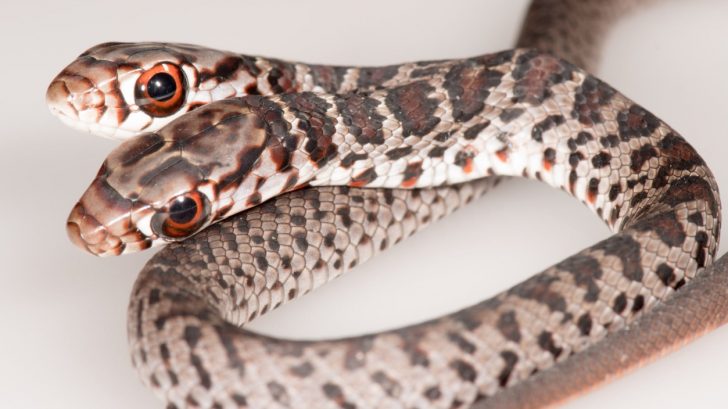 FWC Fish and Wildlife Research Institute announced that they are in the possession of a “rare two-headed southern black racer.”

FWC posted on Facebook that the snake was discovered at Florida resident Kay Rogers’ house in Palm Harbor. The FWC has collected the snake and it’s currently being cared for and monitored by the staff.

This rare phenomenon is called bicephaly and starts during the embryo developmental phase when two monozygotic twins fail to separate from one another. In this specific case, the snakes were separated by the head but not by their bodies.

Both heads seem to be fully functional and move independently from one another. Their tongues flicker normally and they seem to be nice and healthy. However, the snake is young and it’s unknown if it will survive or not.

Most of the time when a snake is born with two heads in the wild it doesn’t survive that long. Their brains make different decisions that inhibit the snake from feeding properly and they often starve. On top of that, the two heads telling the body what to do makes it hard for them to escape predators.

The snake is quite beautiful with its brown patterned body and bright orange eyes. Hopefully, it will live a long time and grow to be happy and healthy.

A rare two-headed southern black racer was recently found at a residence in Palm Harbor by Kay Rogers and family. This…