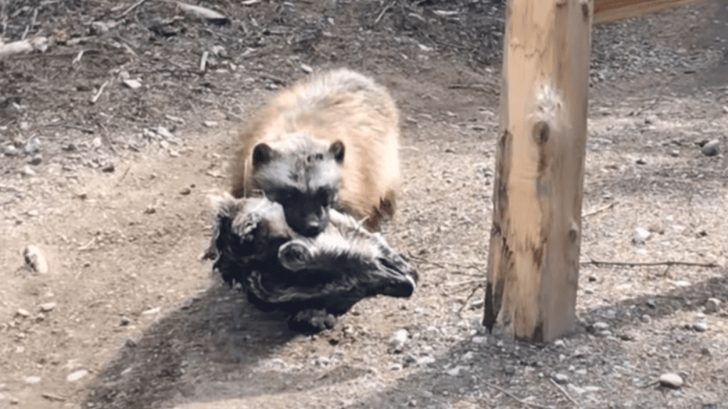 Kelly Willett was getting in some exercise while mountain biking on a wilderness trail in the middle of Anchorage, Alaska when she spotted a wolverine walking down a trail with a goat head in its mouth.

It’s extremely rare to see a wolverine so Kelly quickly whipped out her phone and started filming the animal carrying its meal on the bike path headed in her direction.

The wolverine walked right past Kelly, keeping eye contact, while it walked past her. Wildlife experts say that male wolverines can weigh up to 55 pounds and grow to be 3 feet long. They are the largest of the weasel family and are very stocky, muscular, and mean.

They have been known to attack prey many times its size, even large moose and elk, and have taken them out. However, the wolverine primarily depends upon scavenging to eat and they have incredible stamina that allows them to walk 30 miles in one night to search for food.

Wildlife authorities say that wolverines like to follow trails made by wolves and lynx with the intent of scavenging the remains of their kills.

“While they are built for scavenging, they can be more predator than scavenger if the situation allows for it,” says Howard Golden, researcher for the Alaska Department of Fish and Game.

Their massive teeth and jaws have the bite force to crush bones into dust. They have a really good nose, they can smell food over long distances or buried well under the snow.

“They can climb trees. They have a really warm coat. They’ve got strong claws for digging and defense, and incredibly strong jaws for biting and crushing bone and frozen meat – not the same crushing power as a wolf, but they’re not as big, a big wolverine is 40 pounds and small wolf is 60 pounds,” Golden said.