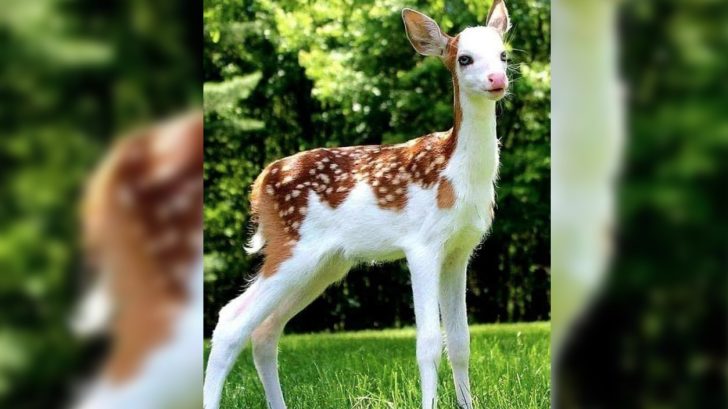 Christmas and Winter, and the Beauty of Spring, Summer and Fall / Facebook

Check out one of the most beautiful baby deer in the world! His name is Dragon, and he was born with a unique condition called Piebaldism at the amusement park/farm Deer Tracks Junction that’s located in Cedar Springs, Michigan.

Deer Tracks Junction wrote on Facebook that they’re “all about Family, Animals, and FUN while making unforgettable memories. You will be able to see all kinds of critters up close and personal, all while strolling through the park.”

There have not been many creatures in the whole world quite like Dragon and he was the attraction park’s star, the best thing about Deer Tracks Junction, according to the staff.

The little deer with Piebaldism attracted many visitors from all around the world with his incredibly adorable, undeniable uniqueness. Piebaldism is a condition that is caused by the absence of cells called melanocytes in certain areas of the skin and hair.

Melanocytes are what produce the pigment melanin which contributes to the color of your hair, eyes, and skin. When melanocytes are absent in the body, it leads to patches of skin and hair that are white, or lighter than normal.

Love Cute Animals reported, “Out of an estimated 28 million whitetail deer in North America, you may find it even more fascinating to know that in the whitetail deer population, it is estimated that less than 2 per cent will be born piebald.”

Park officials say that at birth, Dragon was rejected by his mother but he was lucky to be born at Deer Tracks Junction because they were able to feed and take care of him. Wildlife experts say that his mother probably abandoned him because of his piebald condition.

The reason why is…the bright white fur causes them to be spotted more in the wild, and on top of that piebaldism causes a deer to have limited vision and hearing, thus making it more vulnerable to predators in the wild. The mother instinctually knows this and so rejects the offspring.

Deer Tracks Junction happily took care of Dragon and he lived a little over a year before he finally passed away due to health complications.

According to Love Cute Animals, the park said at the time, “Well, sadly, this is an update that I never wanted to have to make. Despite all medical intervention available, we lost our little Dragon. It has been a tough time here, and he will be greatly missed by all.”

He only lived for a short time on earth, but it was a really cool deer for both the staff at Deer Tracks Junction, as well as anyone visiting that got the chance to get a glimpse of him.

Watch Footage Of The Piebald Deer Below