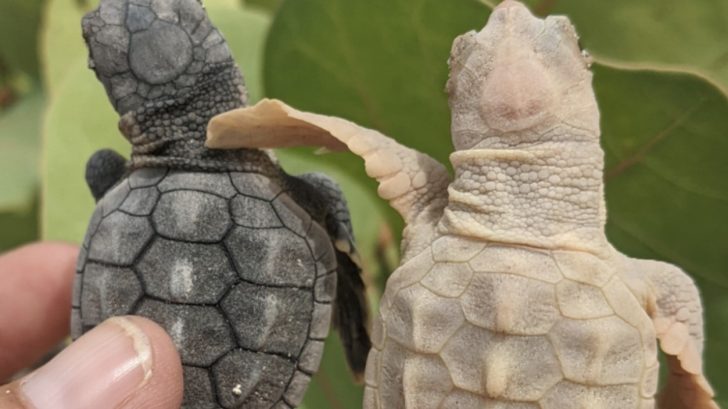 A team working with the department said they ran across the rare find as they were excavating a nest along the beach. Three of them had leucism, which is not like being albino where the animals have red or pink eyes.

Leucism is an abnormal condition of reduced pigmentation that affects a variety of animals, such as birds, mammals, and reptiles, and leaves them with a pale color or patches of reduced coloring on their body.

The turtle team came across a rare find when excavating a nest yesterday – three rare leucistic loggerhead hatchlings. Leucism is a genetic condition that causes reduced pigmentation, as you can see in the photograph of the hatchling on the right. #seaturtle #leucisticturtle pic.twitter.com/7gCD5O2y6n

It’s caused by a genetic mutation that stops the melanin and other pigments from being put into feathers, hair, nails, or skin. Leucism in sea turtles is considered extremely rare, and wildlife biologists are not exactly clear on how often it happens in the wild.

“Often leucistic hatchlings have other malformations which means they do not reach the final stages of development but the team were happy to report that these hatchlings were healthy and strong and have been released along with others that were found left behind in the nest,” Cayman Islands Department of Environment wrote on Facebook.

The department said that they hope to see the leucistic turtles in about 20 years as adults returning to the Cayman waters.

Video footage from 2017 below of a newly hatched leucistic loggerhead turtle.