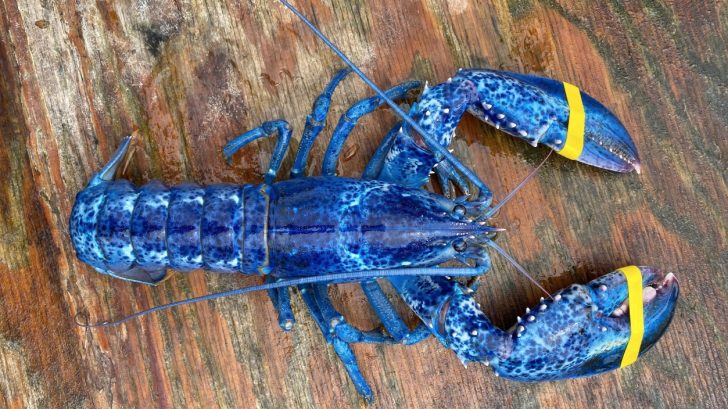 Mark Rand and his son Luke Rand were lobster fishing off the southern coast of Maine when the duo caught an extremely rare bright blue lobster near Peaks Island.

Mark’s wife, and Luke’s mother, Becky Rand runs the family restaurant, Becky’s Diner, located in Portland and the family says the beautiful crustacean will not be eaten.

CHECK IT OUT: A rare blue lobster caught near Peaks Island will soon have a new home. (?: Luke Rand)

Instead, the family plans to let the bright blue lobster live in a tank at their family restaurant for guests to get to see when they visit the establishment on 390 Commercial St.

“We’ve never pulled one this color or even seen one to throw back,” Luke who is 36 years old told the Portland Press Herald.

Luke said the lobster was caught on Thursday (Aug 11) beyond Peaks Island in the Casco Bay area. He’s been fishing for over 20 years and works as the sternman on his dad’s boat.

His dad Mark has been fishing for more than 40 years and described the lobster as a legal-size, healthy-looking male crustacean. Mark said he was feeding the lobster fish as they were on their way back to the restaurant to put it on display.

“It’s not something that you see every day,” Luke Rand said.

According to the University of Maine Lobster Institute, the chances of them finding another blue lobster are 1 in 2 million.