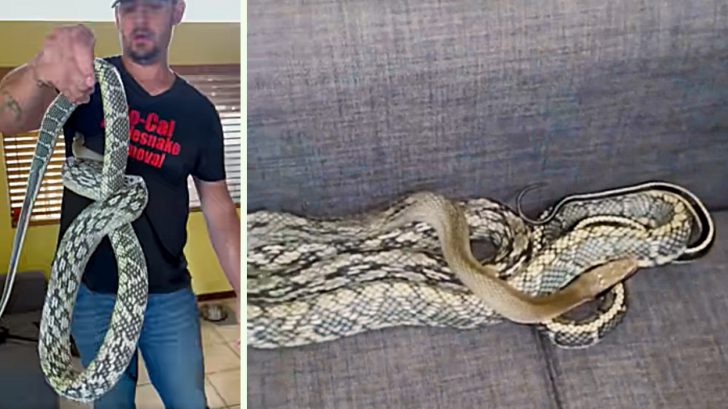 Alex Trejo who owns and operates So-Cal Rattlesnake Removal in San Diego, California recently removed a snake from someone’s home that he said is so rare in the US that you’d have better luck finding a Rolex sitting on the ground than finding this species of snake.

“I literally lift the cushion and there was this giant seven-foot Vietnamese blue beauty rat snake is just coiled up right behind the cushion,” Alex said in a video wtih ABC 10 News.

The So-Cal Rattlesnake Removal owner said he gets calls all the time for removing snakes but when he realized this was a Vietnamese blue beauty rat snake, he knew it must have been someone’s pet that got away.

Alex told ABC, “This guy calls me, is pretty frantic and he’s like, ‘There’s a snake in my couch,’” and he drove out to handle the situation.

When he got to the home, the homeowner led him to a couch and when he lifted up the cushions, he was very surprised to see this type of snake.

Vietnamese blue beauty rat snakes can grow to be up to eight feet long, and the snake was almost there. See the video Alex shared on Facebook below.

Alex said the snake is not venomous but wrangling it wasn’t exactly easy. It hissed and bit at him trying to get away, but eventually, Alex placed it in a safe container and transported the reptile to receive medical attention by an animal medic.

“He didn’t get my skin but he actually got the lining of my shirt,” he said. “I have a very good friend who deals with these exotic animals.”

The homeowner said the snake definitely wasn’t his and didn’t know where it came from.

Alex believes the tropical weather snake most likely escaped from a home nearby and due to it being out in the elements for nearly two days, it had a respiratory infection and was seeking shelter and a warm place to lay.

Alex said the veternarian is “out there treating the snake right now. We really are keeping our fingers crossed hoping the snake makes it.”

Watch Interview With Snake Catcher Below