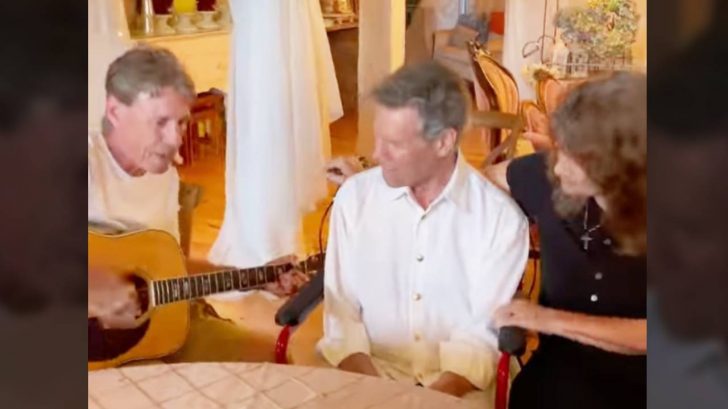 Throughout his career, Randy Travis has earned recognition for his incredible catalog of country songs and impressive live performances. In 2013, his world was rocked when he suffered a stroke that affected his ability to walk, sing, and even talk. Although Randy was faced with treacherous barriers and heartbreaking difficulties, he has since not only began to walk and talk again but is now able to sing a little bit.

He has made appearances at various events, including his induction into the Country Music Hall of Fame where he humbly performed “Amazing Grace” and the 50th CMA Awards where he sang a brief portion of his classic hit “Forever and Ever, Amen.”

Aside from praise and tributes from a variety of stars from different genres, one man that holds the singer near and dear to his heart, chose to pay a tribute to the country legend, and they just so happened to grow up together. Former singing partners and brother to Travis, Ricky Traywick performed one of his brother’s most iconic songs “Deeper Than The Holler.”

While the men share a slight similarity in appearance, their voices are almost exactly alike, as showcased by Traywick in his staggering performance. Seeing that the two previously sang together in their youthful days, calling themselves “The Traywick Brothers,” it’s no surprise that both of these men possess this breathtaking vocal gift.

Traywick enjoys performing in honor of his brother. In fact, he even released a song called “Let God Work (Song For Randy)”. Check it out below.

The Traywick Brothers were reunited recently in their home state of North Carolina, along with their sister Rose. While they were visiting with each other, Ricky grabbed his guitar and played a song for his siblings, and of course the song he chose was a hit for his brother.

Singing “He Walked On Water,” which Randy released in April 1990, Ricky invited Rose to sing along, which he playfully turned down. Randy’s caption explained Rose doesn’t like to sing!

Watch Ricky sing for Randy and Rose in the video below.