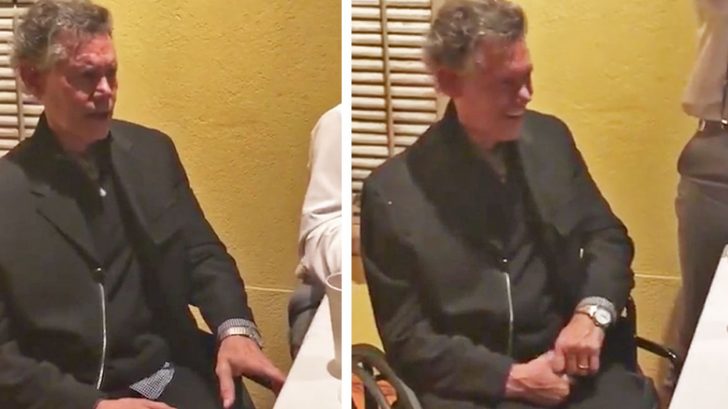 In November 2018, an up-and-coming country singer and a country legend came together for one unforgettable duet. While attending singer James Dupré’s fall wedding, Randy Travis shared a special moment with the groom during the reception. The guests honored Travis on two different occasions singing two of his famous tunes “I Told You So” and “Forever And Ever, Amen.”

James Dupré is a Louisiana-born country music artist. His musical journey began in 2007 while he was working as a paramedic. Dupré began to post videos of himself signing country tunes on Youtube, quickly becoming an overnight sensation. The singer was invited to perform on Ellen in 2010, the same year he released his debut album. In 2011, he signed a record deal with Warner Music Nashville. The singer has since been releasing new music.

On November 17, Dupré married his long-time girlfriend Kelsie in a beautiful Louisiana wedding. It was a quaint family wedding full of the couple’s closest family and friends. Two of those close guests being Randy and Mary Travis. The country music legend and Dupré met on the set of the film, The Prince and have remained close friends ever since.

It was such an honor to have Randy Travis attend the show last night. He's looking better and better.

The video shows Travis in his wheelchair sporting a black sports jacket and button down. With the groom’s brother, Ashton by his side, and a giant smile on Travis’ face, the pair sings his famous tune “I Told You So.” Throughout the song, you can hear the entire room singing alongside Travis. A truly special moment occurred when the country legend began to use his left arm, showing how far he’s come since his 2013 stroke.

Another beautiful moment happened when the bride and the groom came together with Travis to sing another of his classic’s “Forever And Ever, Amen” during the celebration as well. A smile didn’t leave Travis’ face once. You even get a glimpse of his wife joining in on the serenade.

Watch Randy gracefully sing-along to “I Told You So” here.