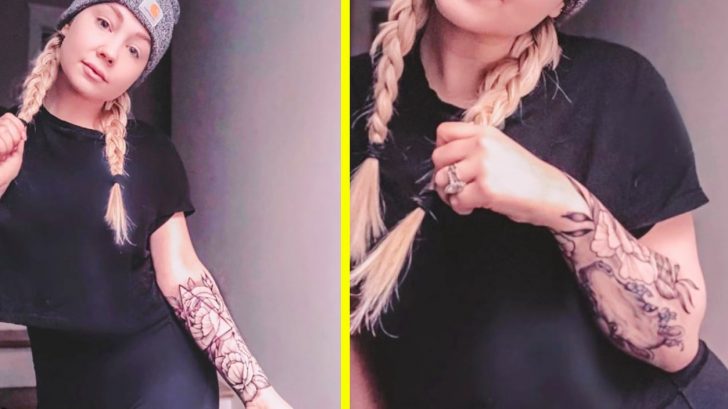 RaeLynn is sporting some new ink in the new year!

The former Voice contestant is no stranger to tattoos. Just a few of her pieces include a cactus on her ankle, a heart with her husband’s name in the center (located on her arm), and a horse’s face (also on her arm).

She got the latter tattoo in honor of her debut studio album WildHorse, which was released in 2017.

Now, RaeLynn has added additional designs to that horse tattoo to make it even more spectacular than it already was.

The “Bra Off” singer turned to Bubba Irwin to create her new ink. His shop, Old Town Ink, is located in Scottsdale, Arizona.

But that hasn’t kept him from tattooing various Nashville-centered singers. In fact, he just gave Kane Brown and his wife, Katelyn, new tattoos in honor of their daughter, Kingsley.

Kane had Kingsley’s name tattooed on his neck, while Katelyn got her name written on her arm.

But the tattoo Bubba gave RaeLynn is much more elaborate.

RaeLynn showcased her new ink through a couple of photos she posted on social media. The design features large, beautiful flowers that cover both sides of her arm. On the underside, a triangle runs over the top of some of the flowers.

Her old horse tattoo, which is on the front of her arm, is now surrounded by the flowers in the new piece.

RaeLynn explained the meaning behind her ink, writing, “Flowers have always meant something special to me and I believe every Triangle in our life we go through finds a way to turn into something beautiful.”

The singer then went on to say, “I love this tattoo,” and thanked Bubba “for making this come to life.”

You can see the photos of RaeLynn’s new tattoo by flipping through the slideshow below.

Flowers have always meant something special to me and I believe every Triangle in our life we go through finds a way to turn into something beautiful. I know mine did. I love this tattoo. I am so beyond excited for this new decade and new season of walking and trusting in God’s great plan and creation for me and Josh’s life. Thank you Bubba for making this come to life. ✨

Years ago, RaeLynn got a music note tattoo with Miranda Lambert when they were on tour together. She once told a funny story about how her mom reacted when she told her about that tattoo, and you can catch that tale in the clip below.

We wonder what RaeLynn’s mom thinks of her newest piece of ink? It’s so detailed!