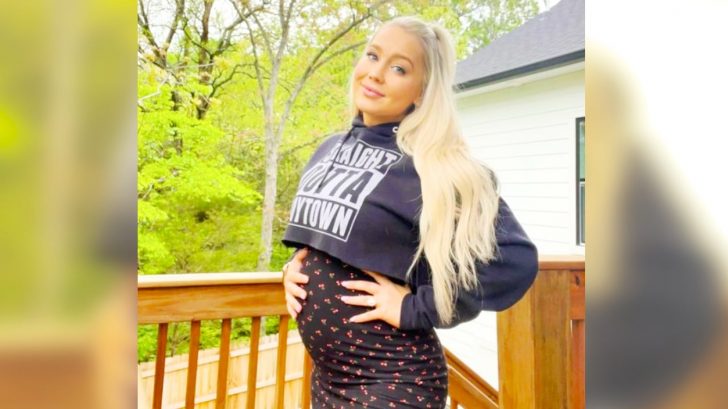 Voice alum RaeLynn celebrated her 27th birthday on May 4. It was also the day she made a huge announcement…she’s pregnant!

This will be RaeLynn and her husband Josh Davis’ first child. They’re expecting a baby girl, and RaeLynn is due in September.

“Well this Georgia Peach and Texas Rose did the thing. HAPPY BIRTHDAY TO ME! I’m 27 years old and 21 weeks into carrying our BABY GIRL,” RaeLynn wrote in her pregnancy announcement.

RaeLynn pointed out how funny it is that she’s having a daughter considering the fact that her debut single was titled “God Made Girls.”

“I should have known with my debut song ‘God Made Girls’ that God would give me a girl first,” RaeLynn told People.

Since announcing she’s expecting, RaeLynn has kept her fans in the loop when it comes to her pregnancy. She shares frequent “bumpdates” and even released a demo of a song she wrote about her unborn daughter, titled “Made for Me to Love.”

But the one thing RaeLynn hadn’t shared was her baby girl’s name. That is, until recently!

On Saturday (June 12), RaeLynn and her daughter were celebrated at a baby shower hosted by Julie and Savannah Chrisley. It was during the shower that RaeLynn revealed her daughter’s name with a giant light up sign.

“DAISY RAE DAVIS,” RaeLynn enthusiastically captioned the baby shower photos she shared on social media. Her daughter’s name also appeared on the candle party favors and on the cookies that were served to guests.

The whole party was daisy-themed, and was decorated in shades of yellow and pink. RaeLynn wore a coordinating floral dress, which was actually the same dress she wore for her pregnancy announcement photos.

What a lovely baby shower! RaeLynn is absolutely glowing.