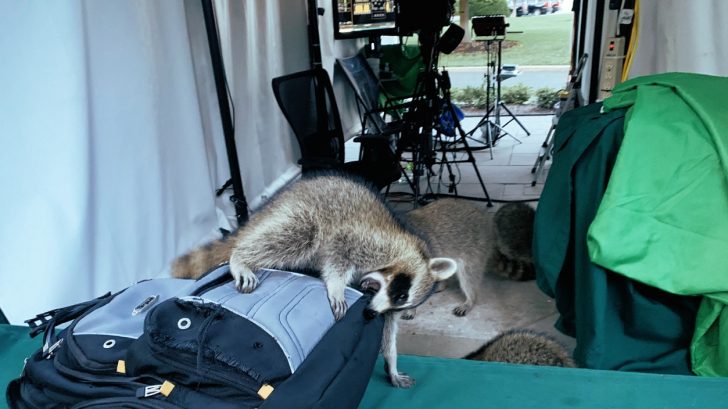 According to Paula Reid, a White House Correspondent for CBS News, a gang of raccoons attacked journalists and news crew members as they were setting up equipment on Monday morning.

“Strong Pawnee vibes at White House this morning as a raccoon attacked multiple news crews on North Lawn,” Paula Reid wrote on Twitter. [The raccoons] “allegedly grabbed [the] pant leg of a photographer & then a corespondent before being fended off.”

Strong Pawnee vibes at White House this morning as a raccoon attacked multiple news crews on North Lawn. ? allegedly grabbed pant leg of a photographer & then a corespondent before being fended off. (WH ?? ? pictured here in more peaceful times.) pic.twitter.com/o5VbTUHxBR

The raccoons reportedly rummaged through the crew members’ gear and belongings that were in the tents along the North Lawn before grabbing onto the pant leg of a photographer. Once it grabbed another person’s pants they began to shoo the creatures off.

According to Paula, the White House contacted the U.S. General Services Administration to do something about the critters. Officials took quick action and placed multiple raccoon traps around the White House property.

“UPDATE: Sources tell @CBSNews White House reaching out to @USGSA
about aggressive Raccoon who allegedly attacked crews this AM,” Paula wrote on Twitter.

The following day Paula was back at the White House again and found one of the raccoon traps the officials had placed in the bushes. She filmed a video of it and you can watch that below!

MORE: It’s a trap. We found one of the traps set out for the ? who attacked a few journalists yesterday on the White House north lawn. Feds using marshmallows as bait…. #TuesdayThoughts pic.twitter.com/eV5j2kIhdc