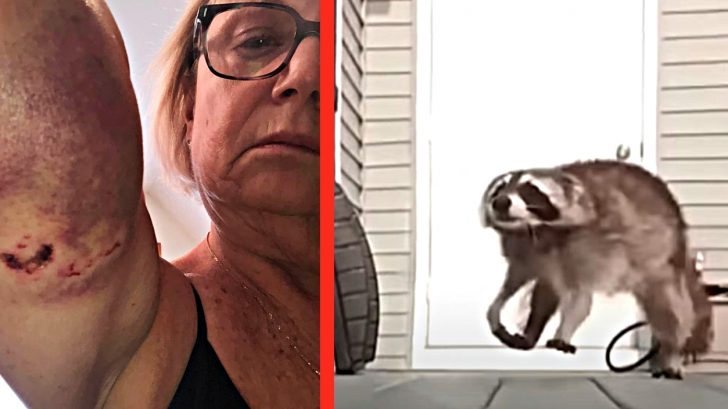 70-year-old Donna Sanginario from Massachusetts recalled the terrifying moment when she had a bloody battle with an aggressive racoon while attempting to put up Christmas decorations.

Donna said in a video interview with Inside Edition that she went outside to place Christmas lights around her home when she found a racoon inside a trashcan that was sitting on her porch.

Video footage showed her trying to shoo it away with a broom but the animal is clearly aggravated and goes full-blown attack mode on her.

“This thing was not gonna leave me alone,” Donna told Inside Edition. “I’m screaming wicked loud. He’s screeching, and we’re like having a ‘Crocodile Dundee’ attack.”

The animal bit, scratched, and clawed her several times, even through the sweatshirt she was wearing. The scuffle ended with the racoon running off and her bloody, bruised and needing a trip to the hospital.

She called the police and reported the incident and went on to the hospital to get treatment. She also posted a few photos on Facebook showing off her battle scars from the encounter.

“My heart was racing so fast. I literally thought I was having a heart attack,” she said.

See her full statement below on the attack and video interview.

Watch Her Full Interview With Inside Edition Below