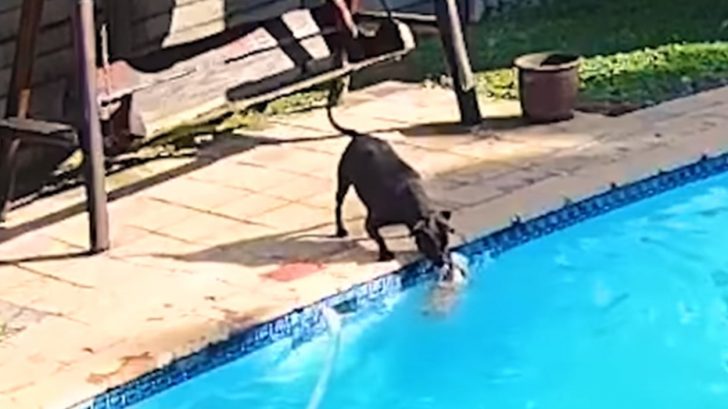 Byron Thanarayen and his wife Melissa were home with their dogs Chucky, a 13-year-old toy Pomeranian and Jessie, a 7-year-old Staffordshire bull terrier when a life or death situation unfolded on camera.

The security camera in the backyard captured Chucky walking outside by the pool, not paying attention to where he was going and accidentally falling into the pool. Obviously not the best swimmer, he began to swim in circles and was stuck there in the water for a few minutes until Jessie heard the splashing.

Jessie came to the water’s edge and noticed the desperate situation her friend was in and began to quickly pace back and forth as if she was trying to think of a way to save him. Chucky frantically bobbed around and kicked trying multiple times to climb out but it was just too high of a ledge for him to make it on his own.

Getting tired and worn out, Chucky swam towards Jessie one last time and tried with all his might to climb over the edge. This time, Jessie bit the back of Chucky’s neck and tried to pull him up. It was working. Chucky was almost there and then Jessie took her paw and wrapped it around him to pull him up all the way to dry land.

Fortunately, Jessie saved the day and Chucky didn’t drown. He ran off into the yard to shake off the water while Jessie followed along ready to play and have fun now. The dogs’ owners didn’t find out what happened until later when they watched the security footage.

“We thought maybe he dipped his head in the water [bowl], but there was no mess in the house to support this suggestion,” Bryon told The Times South Africa. “It was heart-wrenching to watch. We still struggle to watch that video today, just thinking of what could have happened if Jessie was not there,” Byron told the Times, adding: “I’m really proud of her, considering she is the youngest.”

Watch Footage Of The Incident Below