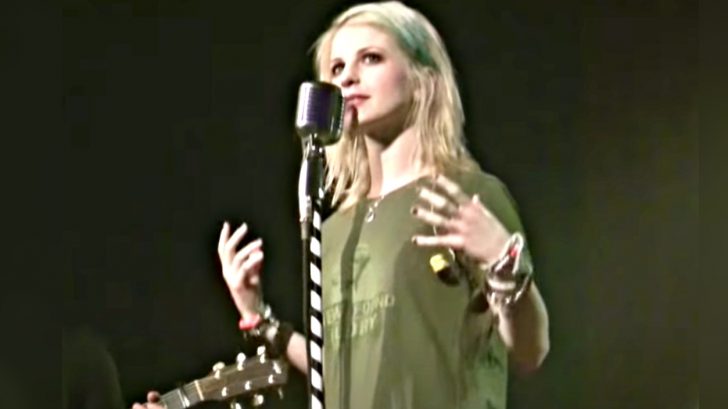 When Loretta Lynn first sang “You Ain’t Woman Enough (To Take My Man)” it was a ballad to help a fan dealing with an unfaithful husband. She never expected the song to be as big as it was – or to be covered by a popular pop-punk band.

Lynn wrote her hit song “You Ain’t Woman Enough (To Take My Man)” in 10 minutes after a fan found their way backstage and inspired her to turn the tables on the gal’s bad luck. During an interview with PBS, Lynn told how the poor fan poured her heart out and said “that her husband had not brought her to the concert. Instead, he had brought the other woman.”

Feeling sympathy for her fan, Lynn told her, “Honey, she ain’t woman enough to take your man.”

With that, the song was born. Her big heart and close relationship to her fans ended up helping her create one of the biggest hits of her career. Peaking at No. 2 on the Country Charts in 1966 – it became the title-track to Lynn’s first No. 1 album on the Billboard Top Country Albums chart.

As time went on, the tune became a ballad for women dealing with the heartache of unfaithful men and snake-in-the-grass women. As a result, many female country artists have covered the timeless tune – including Kellie Pickler, The Pistol Annies, and Martina McBride.

But one band that we never expected to go country was the pop-punk sensation, Paramore. Known for her bright hair-styles and uncensored music, lead singer Hayley Williams has made her own name in the music world.

But what most people don’t know about this feisty gal is that her roots are in Franklin, Tennessee. While she has a Grammy Award for Best Rock Song under her belt – she still knows how to keep it southern.

While playing at the Ryman, Paramore wanted to play something exclusive and special. So what better than a country-crossover of Loretta Lynn’s “You Ain’t Woman Enough” to get the fans excited?

Up on stage with nothing but her voice accompanied by a guitar, she belted out each note until the very end. As she finished her performance – the crowd went absolutely wild with loud screams and applause for the young artist.

After the performance, a fan posted the video to social media and it quickly was brought to Loretta Lynn herself. Williams had never expected for this to happen and even said that “I thought that she would either A. never hear it or B. hear it and want to slaughter us.”

Instead, Lynn was incredibly touched by the singer’s decision to sing her classic song. She felt that “[Williams] outdone herself – she done it proud.”

Loretta even wrote the lead singer, Hayley Williams a letter addressed “Hayley Honey.” It is obvious that there is a great deal of respect between these two empowering female vocalists.

You can watch Hayley Williams’ full performance that even the Queen of Country approved of below and let us know what you think in the comments.