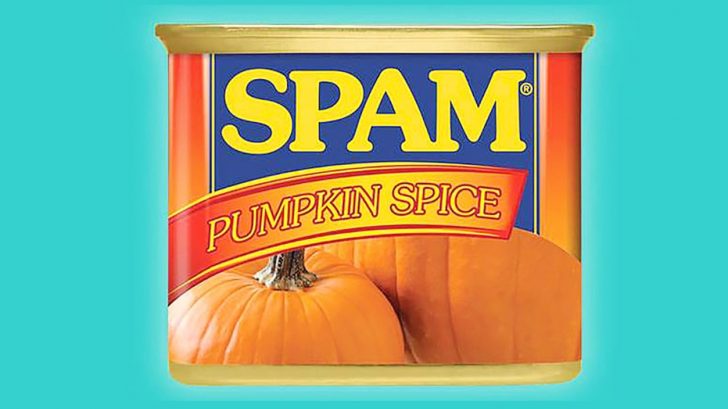 Every autumn, people line up in droves to get the pumpkin spice latte (or PSL) at Starbucks. The seasonal obsession with PSL’s inspired other companies to offer pumpkin spice versions of their iconic products.

It started off innocent enough. Pumpkin spice breads and bagels hit the market. There were even pumpkin spice cream cheeses, oatmeals, and cereals.

But when people ended up loving all of the above things, more companies started churning out pumpkin spice products. While many could get behind pumpkin spice Oreos or even pumpkin spice tea, people started to question if the whole trend had gone to far when things like pumpkin spice almonds, chicken wings, and even dog treats hit store shelves.

Now, with a new fall season just beginning, it’s time for companies to start unveiling their pumpkin spice products for the year. And recently, Spam joined the pumpkin spice game with a product no one ever asked for.

Yes, you read that right. Spam, the famous meat in a can, has released a pumpkin spice flavor.

We know you may think this is some sort of late April Fool’s joke, but we’re 100% serious.

We regret to inform you that pumpkin spice Spam exists https://t.co/8pnLgUPu9t pic.twitter.com/wMfEBxqKJ2

Autumn is coming, so of course Pumpkin Spice Spam is, too https://t.co/M5ZxVk250m pic.twitter.com/L1EGt4eCpC

As for how it tastes, the folks at The Daily Meal had some surprising things to say:

“Although this is one of the more peculiar pumpkin spice products on the market, surprisingly, the general consensus was that the flavor really wasn’t bad. It certainly had that soft texture that anyone who’s had Spam will be familiar with, as well as the expected salty, porky Spam flavor. Cinnamon, clove, allspice and nutmeg shared center stage with the rich and savory Spam flavor, however, along with a hint of sweetness.“

The Daily Meal staff thought the pumpkin spice Spam would make a good breakfast dish, which Spam itself actually recommends. It says you should serve the product with dishes including waffles, cornbread, frittatas, or a fall vegetable hash.

If you’re brave enough to give the pumpkin spice Spam a try, it was released on September 23. It is now available on Spam’s official website and in all Walmart stores.