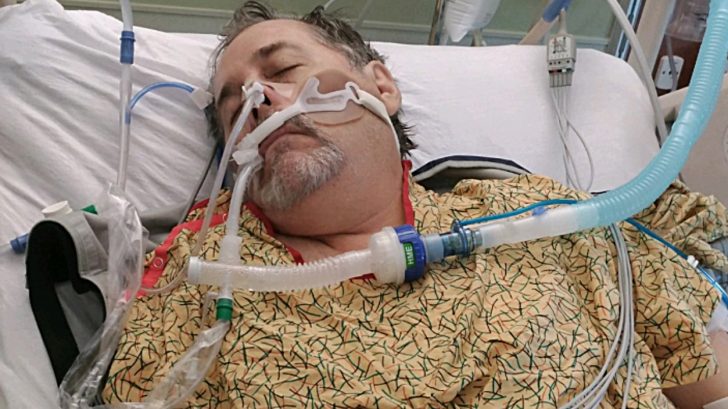 A cattle farmer named Greg Nolen in Alvin, Texas almost died twice after being attacked by his “psychotic” cow Bellvia. The only reason he’s says he’s still alive is because his friend Sabrina saved him.

According to Greg, ever since Bellvia had her baby calf she’s been extremely aggressive. The attacks started off with her cornering Greg in the fence and then head butting him, fortunately, that’s all she did that time.

However, the second time she attacked him she was way more vicious. She knocked him to down the ground and broke all his ribs except one on the left side of his body. One of his ribs actually punctured his lungs, she destroyed his spleen and sent him straight to the hospital.

“When she got me down, she broke all my ribs on this side of my body except for one,” said Nolen. “She basically punctured my ribs, punctured my lungs and destroyed my spleen.” Greg told ABC News.

His friend Sabrina says she saw Bellvia headbutting him on the ground and she ran over to try and stop it. She grabbed Greg’s cane that was laying on the ground and started smacking the cow in the head until she finally backed off.

“If she hadn’t been here, I’d have died,” he said of Sabrina.

Greg was rushed to the hospital where he spent two and a half weeks receiving medical treatment and recovering from his wounds. Now he has a massive scar that stretches down the front of his body and another one on his ribs.

Greg has been viciously attacked by his cow 2 times. 9 weeks ago she almost ended his life. Tonight when asked why he still cares for her he tells me he just can’t give her up… but has a lesson he wants to share with others on how to protect themselves ….story at 10 #Abc13 pic.twitter.com/YopZ7iSmgF

Even though all this has happened, Greg says he still going to keep Bellvia and when asked by ABC News if he thinks she’ll change he replied with, “No, I don’t. I’m just going to have to deal with it”

He explains his reason for keeping her is because she’s a registered Braford cow and he’s invested a lot of money into her. He wants to keep her to raise offspring he can use for stock shows.