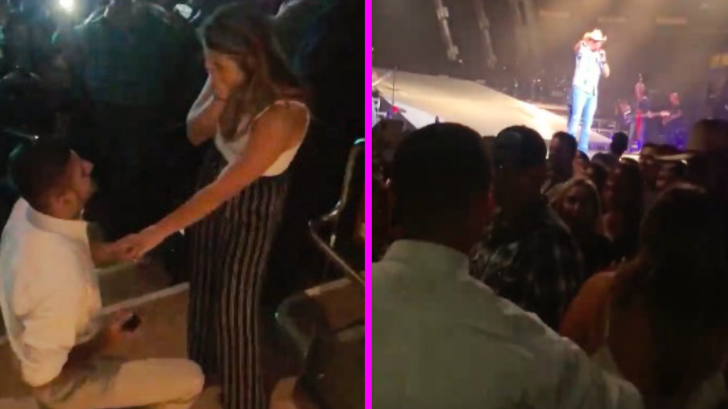 Jason Aldean has recorded his fair share of love songs over the years, with one of his most recent being “You Make it Easy.” Released in February 2018 as the first single off of Jason’s album Rearview Town, the song topped the U.S. Country Airplay chart and has already been certified Platinum.

As you can see, the song quickly became a fan-favorite. Its popularity increased even more once its three-part music video series was released. The third installment of the emotional series is the most popular, with millions of views on YouTube.

Many couples quickly adopted “You Make It Easy” as their song, including a pair of Jason’s fans named Alex and Jess. Together since March 2018, the country music-lovin’ couple scored a pair of seats at one of Jason’s August 2018 concerts so they could hear him play the song live.

Little did Jess know that Alex had a big surprise in store for her. While Jason was in the middle of singing “You Make It Easy,” Alex dropped to one knee and proposed. His actions didn’t go unnoticed, and they were showered with cheers from the surrounding concertgoers.

In fact, the audience was cheering so loud that Jason caught on, and brought his show to a halt to see what was happening:

“I’m so confused right now,” Jason said as the crowd parted so the couple could come up close to the stage. “I think somebody just got married.”

Alex and Jess eventually made their way to the front of the crowd, where Jason spotted them and decided to have a toast in honor of their engagement.

“We’re always looking for a reason to celebrate something,” Jason said as he grabbed a red Solo cup to raise in a toast to the happy couple. “This is perfect. So here’s to you guys, may you guys have a long and blissful marriage.”

Jason’s toast surely made the couple’s night even more memorable. You can see how that special night unfolded by tuning in to the video below.

Congratulations to Alex and Jess on their engagement!