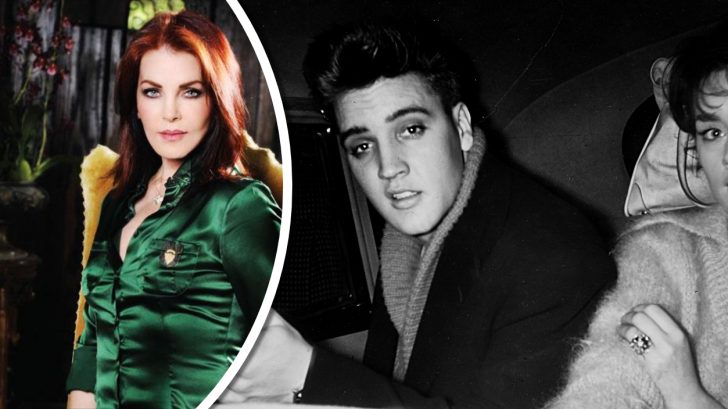 Already a music superstar and Army veteran, Elvis Presley had lived a lifetime of experiences by the time he married Priscilla at just 32 years old.

The mid-spring wedding at Las Vegas’ brand-new Aladdin Resort & Casino was something that not many people knew about beforehand – and something the media went bonkers for the days following.

Elvis, who at the time was one of the world’s biggest stars, had kept details of his wedding a secret from nearly everyone – only revealing them to people on a need-to-know basis. Because of this, many people today do not know the majority of the curious details surrounding his big day with Priscilla Presley nee Beaulieu.

Priscilla brought her younger sister along with her to the wedding and she served as the maid of honor during what would become – one of the most-talked-about weddings to ever occur.

Elvis’ love story with Priscilla first started when he was stationed in Germany with the Army and she was living with her family there while her Air Force Captain father was stationed there. They first met at a party when she was just 14 years old – and he was 24.

“My parents were a nervous wreck,” Priscilla told Australia’s Sunday Night. “Elvis came in full uniform – which my dad liked a lot. And shook his hand and they started talking right away – for an hour. And I’m looking at my watch like ‘Oh my gosh he’s taking up all my time’.”

“But yes, they were nervous…and I think it was when I told my parents that they had to let me go [marry Elvis] or they would ruin my life.”

Elvis and Priscilla as they prepare to board a chartered plane after their marriage, 1967. pic.twitter.com/B5vMMUZ50i

At age 21, Priscilla and Elvis officially tied the knot and began charting the next stage of their life…in a marriage that would last but six years. Upon her relocation to his Memphis estate, Graceland, she discovered things were much different than she had imagined.

“Moving into Graceland, he already had his inner circle,” Priscilla confessed to the U.K. daytime talk show, Loose Women. “Of course they embraced me, but I never realized that that was it. We didn’t go out. He didn’t like eating in restaurants because people would take pictures of him and he didn’t want to be shot…putting a fork in his mouth.“

Discussing a specific clip of Elvis singing “Love Me Tender” and kissing many of the women in the audience, Sunday Night‘s Mike Amor asked Priscilla if that kind of behavior ever bothered her.

“Umm yeah, because they’d start showing up after the show,” she quipped with a giggle. “Kinda hanging out waiting around for possible more.”

She decided after some time, that enough was enough with his actions – and after a number of years, she decided his infidelities had been enough.

“You know, he wasn’t faithful – not that he had someone special, but when you’re in the entertainment business there is always that. And I tried to turn my back to that, but I just didn’t want to share him. It’s as simple as that.”

She continued on, discussing Elvis’ hopes and dreams of family life…but how she thinks that might have clashed with his natural tendencies.

“As much as he wanted to be married and have a family, I don’t know if he was ever cut to be married. Because I don’t think he could ever, ever be faithful to one woman.”

Even though they ended up divorcing due to various reasons, they always remained as close as ever. Never once did they ever consider not being a part of each other’s lives – and they wanted to make sure their baby girl, Lisa Marie, was cared for in the best way possible.

“We never lost our friendship and care for each other,” she said of their relationship following the end of their marriage. “He would call me at night…I really valued his calls. I valued him telling me, you know, what was wrong and – I haven’t really said this – because I valued his trust in me so much.”

Even though they divorced, she still loved him dearly and maintained a very close relationship with him until he passed away in August 1977.

The magical life he led has been the subject of countless movies, shows, and books over the last 40 years, but Priscilla herself pushed hard to tell the real story of his life and who he was as a person in her 2018 documentary Elvis Presley: The Searcher.

Partnered with HBO, this takes a whole new look at the life of Elvis and aims to show the true sides to The King that were often overlooked, mischaracterized, or never known.

Watch the trailer for her documentary above along with the full Sunday Night interview below and let us know what you think in the comments.