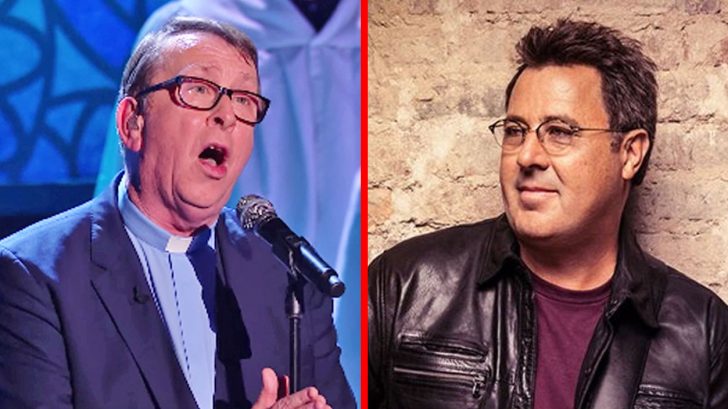 An Irish priest by the name of Father Ray Kelly first auditioned for Britain’s Got Talent with an incredible version of R.E.M.’s “Everybody Hurts.” He says he was inspired to try out for the show after he was filmed singing at a wedding several years ago and once it was posted online, the views just kept getting higher and higher. As of February 2019, that video has 66 MILLION views.

At 64 years old, Father Ray was commended for continuing to chase his dreams before beginning his audition, saying that he hopes to be the first singing priest to win Britain’s Got Talent. The judges were pleasantly surprised with his talent, and gave him a standing ovations, followed by four yeses to advance to the next round of competition.

During his semi-final round performance, Father Ray chose a song that meant a lot to him, Vince Gill‘s emotional ballad “Go Rest High On That Mountain.” Backed by a beautiful church choir and standing in front of beautiful stained glass windows, Father Ray brought raw emotion to the talent show.

We’re sure this isn’t the first time Father Ray has performed this song, since it is sung a lot at funerals, but it certainly has to be his most powerful.

His performance even caught Gill’s attention across the pond!

While Gill didn’t reveal his opinion on Father Ray’s performance, we can only assume he enjoyed it, since he promoted it on Twitter!

Father Ray didn’t make it to the finals, but in our eyes, he is a winner. Watch his incredible take on “Go Rest High” in the video below.