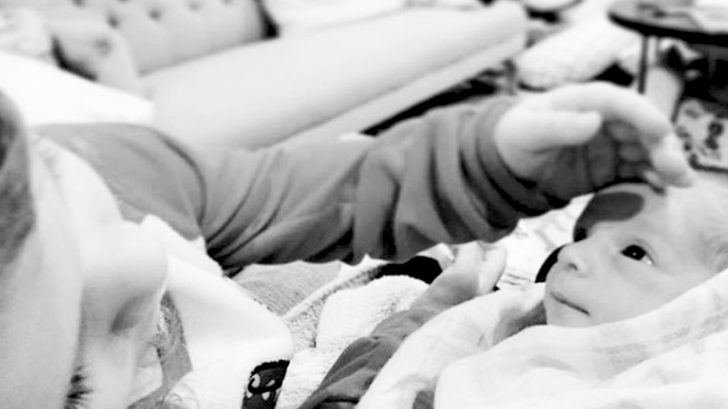 When Lady Antebellum‘s Hillary Scott and her husband Chris Tyrrell welcomed their twin daughters Betsy and Emory, their entire world changed. They instantly went from being parents to four-year-old Eisele to being parents of three.

In a post Hillary shared to Instagram, she openly admitted that life has been quite the whirlwind ever since the twins were born. Hillary shared a photo of herself laughing on the couch, pointing out the fact that she still hadn’t put her Christmas pillows away.

Even though her life exists in a state of semi-chaos right now, Hillary says that her “heart is FULL” with joy and love for her daughters.

Am I laughing? Am I crying? Am I asleep? Am I awake? Have I eaten? Have I showered? Have I brushed my teeth or shaved my legs? Are those still Christmas pillows? I don’t think I know the answers to any of these questions, but y’all my heart is FULL and this is me, #twoweekspostpartum captured in a photo today. ❤️??‍♀️?

In the midst of these crazy times, one person has been a big help to Hillary as she has been taking care of the twins. That person is none other than Miss Eisele, who has been thriving in her new big sister role.

Back when Hillary first introduced the twins, one of the photos she shared was of Eisele holding them. The little girl beamed at the camera with one of the brightest smiles we’ve ever seen. “Big Sister Eisele’s heart is full of love for her sisters and she is already such an incredible little helper,” Hillary wrote. (Click the arrow on the side of the photo below to see the picture with Eisele).

Our identical little ladies Betsy Mack and Emory JoAnn were born January 29th around 2am, 5.5lbs each and 17 inches long. Their Daddy took this picture when they were two days old napping on Mama. Their favorite place to be, other than on me, is nose to nose and cheek to cheek. Big Sister Eisele’s heart is full of love for her sisters and she is already such an incredible little helper. One week in and we are definitely seeing double! Double the blessing, double the tired double the laundry, but double the love! ~Tyrrell Party of Five ?????????? ?????

On Thursday (February 15), Hillary shared yet another precious moment that she happened to capture between Eisele and one of the twins. The simple but sweet photo shows Eisele holding one of her baby sisters while she gently touches her forehead. Eyes wide, the little baby stares up at her big sister with the most adoring look ever.

Seriously, how can you look at that photo and not say “awwww”? It’s clear that Eisele is an awesome big sister!