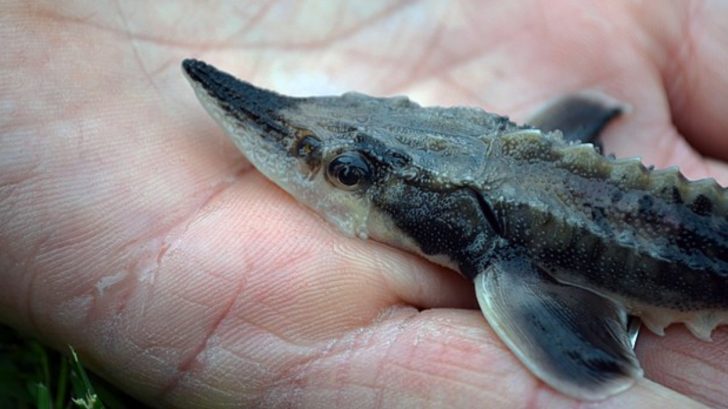 Earlier this year, scientists and students were taking a census of lake sturgeon in Georgia and discovered three females with mature eggs. The scientists say this indicates that these unique ‘living fossils’ might be reproducing in the state for the first time in 50 years.

The prehistoric fish has been around for more than 136 million years and were wiped out in the 1970s.

“It’s exciting because it’s confirmation that they are becoming mature and trying to spawn,” Martin J. Hamel, an associate professor at the University of Georgia Warnell School of Forestry and Natural Resources said, according to Daily Mail.

The Georgia Department of Natural Resources (DNR) reintroduced the fish back into the state’s lakes in 2002. The scientists and students were in the process of tagging and tracking sturgeon in the river system, which is part of an effort to better understand the population when they found the three females.

“We found three females that had black eggs—mature eggs that are ready to be fertilized,” said Hamel. “This was the first time anybody has found a sexually mature female since the reintroduction program began.”

Wildlife experts say that it can take up to 25 years for female lake sturgeon to reach sexual maturity and you know they’ve reached it when you can see they develop black eggs, which are highly coveted caviar.

Lake sturgeon are native to the Coosa River system and thrived there for many generations, but due to pollution, habitat destruction, and over-harvesting of their prized eggs and the fish itself, they begun to disappear from the region.

Dams have also prevented the fish from migrating through the lakes and rivers to their spawning spots.

“The Clean Water Act really did improve the overall habitat and river quality,” said Hamel, according to Daily Mail. “So, the habitat got better and with a ban on harvesting lake sturgeon, DNR considered trying to reintroduce the population.”

30 years after they disappeared, Georgia’s DNR began a project to reintroduce the fish into the Coosa River, and about 330,000 fish, most about 6 inches long, have been released since 2002.

“While that seems like a lot of sturgeon, the survival rate of fish that are released at that size is likely between 1-10%,” he said.

DNR officials worked with wildlife authorities in Wisconsin to bring eggs back to Georgia where they were incubated, hatched, and released into the Coosa River. They’ve been repeating this process nearly every year since the reintroduction program started.

“It’s a big investment because you don’t even know if the stocked fish are going to survive, let alone grow up and reproduce,” Hamel said Daily Mail reported.

According to the Fish and Wildlife Service, the fish can reach up to 9 feet long and 310 pounds and the oldest lake sturgeon on record was 152 years old. The largest ever caught on record in Georgia was 52 inches long and weighed 24 pounds.

“This is the largest fish that anyone has documented on the Coosa River,” Hamel told the Associated Press via email.