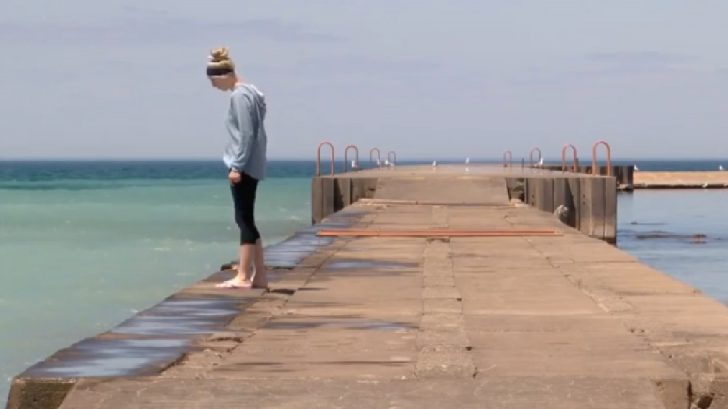 It’s the perfect story of being in the right place at the right time for Alyssa DeWitt, a mom from Michigan who became a hero when she rescued three girls who were caught in the rough waters of Lake Michigan.

DeWitt, who is five months pregnant with her fourth child, took an unplanned trip to the lake with her kids to the lake. But, that day she opted to visit the pier side of the lake, a part of the waterfront that they “never” visit.

“Today, I felt that this side was best, for whatever reason. You can’t tell me it was ‘luck’ I was there when I was. I was meant to be there.. and I’m so sooo thankful for it,” DeWitt wrote on Facebook.

While her own kids were swimming, the mom noticed a pair of hands waving from the water near the pier. She got her own kids out of the water and ran to the hands she had seen waving. When she got there, she noticed three kids struggling to keep their heads above water as they were being slammed into the pier wall.

“They were literally drowning in front of my eyes and there was not one person on that side of the beach I could scream to for help.”

DeWitt called 911, but couldn’t hear the dispatcher due to the wind and waves. So, she took matters into her own hands and one-by-one pulled the kids out of the water.

“One of those girls looked at me with so much fear in her eyes and told me she was going to die. I promised her I would not let that happen….somehow I did it,” Dewitt wrote. “I pulled them up the pier wall, with the waves slamming into me and throwing the kids all over the place, pulling with all my might on wet slippery hands, and almost going over the edge myself a few times.”

Police arrived shortly after the three kids, all under the age of 15, were pulled from the water. They report that they only suffered minor injuries.

“Without the actions of this heroic young lady could have easily turned out differently,” Manistee City Police Chief Josh Glass said. “Especially being a father of young children, it’s extremely impressive the way this young lady called to action without hesitation and I think it’s pretty obvious what would have happened if she wasn’t there.”

Police reportedly said that two of the three children were swimming in the lake when they began to struggle, and the third child, who was older but part of the same group, entered the water to try to help them.

DeWitt went to the emergency room following the rescue as a precaution since she was laying on her stomach on the pier. Both mom and baby are safe.