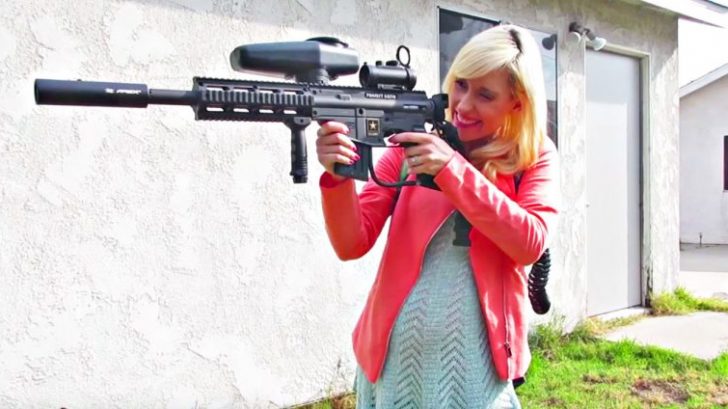 This future baby momma is helping her husband feel the pain of pregnancy in a whole new way!

The Ellingtons are just a normal, young couple excited to share their great news with the world in one of the most creative ways you could imagine – with a fully loaded paintball gun!

Chelsea and Luke Ellington have come up with the perfect plan to find out their baby’s gender, and to help Luke share in Chelsea’s future labor pains.

They had their friends load up the massive paintball gun with either pink or blue paint to represent the gender and then handed them the sealed letter from the doctor that shows their future bundle of joy’s gender.

Stepping out into the yard, Luke dons a painter’s suit while pregnant Chelsea gets saddled up with this awesome paintball gun and a loaded ammo pack.

“It’s supposed to hurt,” Luke replied excitedly. “That’s the point of it!”

As Chelsea starts firing at Luke, you can hear his friends shout “give him more” and she keeps peppering him with paintballs long after she can tell what gender of baby they’re having!

Luke moaning in the background between getting shot, shouts out, “Do you know what it is yet?!”