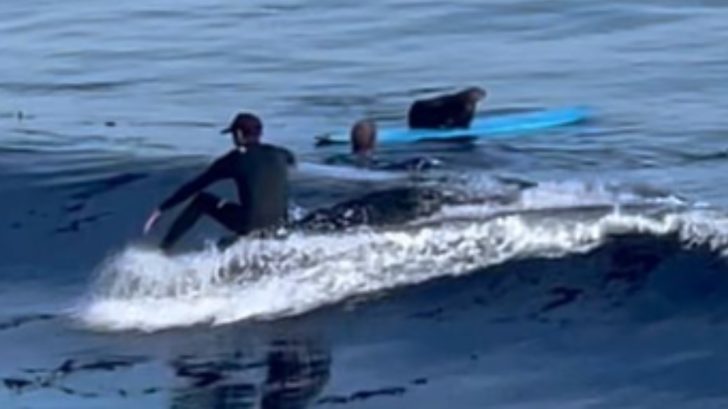 A man surfing on the coast of central California was filmed getting his surfboard stolen by an otter. The otter then refused to return the board, putting up quite the fight.

The five-minute video posted to Instagram, which was said to have been shot on Wednesday (Sept 15), shows the otter sitting on top of the man’s surfboard snarling at him.

The surfer, Nick Ericksen, would splash water on the otter, yell at it, and every time he put his hands on the board the otter would look like it was trying to bite at him to keep the man back.

The viciously snarling otter was a young mother-to-be and most likely just tired and the surfboard looked like a nice thing to float on in the ocean.

Santa Cruz onlookers watched and debated on going down there to help him and eventually a surfer did. The other surfer swam out to assist Nick by flanking the otter and grabbing the back of the board while Nick kept the otter distracted at the front of the board.

“[Nick] had a real case of the Mondays yesterday,” Chad Underhill-Meras wrote on Instagram. “A pregnant otter stole his surfboard, starts gnawing on it, and they had a standoff.”

Once the otter jumped off the surfboard, the second surfer grabbed it and swam off as fast as he could. The otter finally realized what was going on and started chasing the surfer trying to get it back.

Fortunately, the waves push the surfer giving him speed to get away and he ended up meeting up with the owner of the surfboard and giving it back to him.

“At the end he gets a little help to get his board back, almost attacked at a couple points, then gets chased in like a true local,” Underhill-Meras wrote.

Watch The Otter Encounter In The Video Below