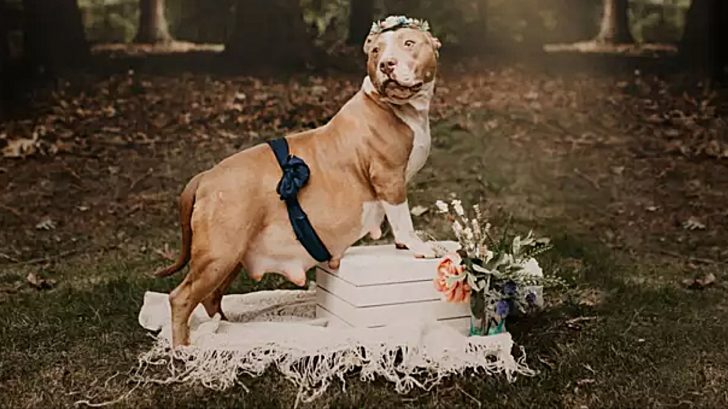 In September this two-year-old pitbull named Mama Pickles posed for some of the most adorable photos with her newborn litter of eight puppies.

Mama Pickles was found heavily pregnant and roaming the streets early this September. After animal rescue picked her up they called her old owners who said they no longer wanted her.

She was then taken to a voluntary organization in North Carolina called Pitts and Giggles, a place that provides maternity and postnatal care for pregnant bulldog breeds and their puppies.

Because she was so sweet and friendly Pitts and Giggles wanted to do a maternity photo shoot with her to capture memories of Pickles as well as get some pictures to help her get adopted.

“When Pits & Giggles reached out saying that they just brought in a Mama from the shelter that was the proudest, happy and caring little thing, we wanted to take photos to keep those precious moments.” Lauren Sykes, a volunteer and photographer for Pitts and Giggles said.

Once Mama Pickles got in front of the camera it was like she was meant for the spotlight. She posed in the most glamorous ways, licking her lips, making faces and looking back over her shoulder like a professional model.

A few days after her photoshoot she went into labor and Pickles popped out eight beautiful babies. They were so adorable that they decided to do another photoshoot, this time with her babies.

Pitts and Giggles say they will wait for Pickles to physically heal before they start the adoption process for her and her pups and if you’re interested in adopting or fostering them you can visit the organization main website for more information.

Check Out Another Dog’s Maternity Photoshoot Below