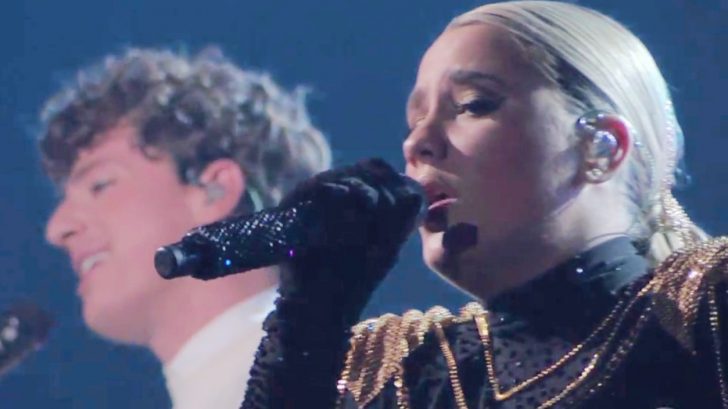 While this may be Gabby Barrett’s third awards show performance in as many months, this is the first time she has taken the stage at the Country Music Association Awards.

In 2019, Barrett and her husband, Cade Foehner, walked the red carpet as newlyweds and this year, they walked the carpet as glowing parents-to-be. The singer announced her pregnancy in August, revealing that their baby girl will be born in early 2021.

The New Artist of the year nominee took the stage with pop star Charlie Puth for a version of her breakout single “I Hope,” which went to top both the Hot Country Songs and Country Airplay charts. It also crossed over to claim the #10 spot on the all-genre Billboard Hot 100 and has been certified 2x Platinum by the RIAA.

Barrett broke out on the scene after she competed, and placed third, on the first season of ABC’s rebooted American Idol. Her husband was also a finalist that season. At her previous awards show performances, Foehner accompanied her on guitar and this one was no different!

Being as pregnant as she is, singing is a little more difficult than normal, which she said is making her a little nervous for the performance, along with the fact that she’s never even met Puth in person!

She told Taste Of Country, “Hopefully it all goes well. I’m having a hard time breathing, being in the third trimester, and baby just crushing your diaphragm — you know, all the good things!”

Well, her performance with Puth went off without a hitch and you couldn’t even tell they had never performed the song together, let alone met!

A BEAUTIFUL performance by Charlie Puth and Gabby Barrett! The duo sang "I Hope" at the #CMAawards. #CharliePuth #GabbyBarrett (? John Russell/CMA) pic.twitter.com/wI4HrUZBXR

Puth played piano during the performance and kicked it off with a vocal run. Barrett sat on a stool in center stage and s

Take a look at their performance below.