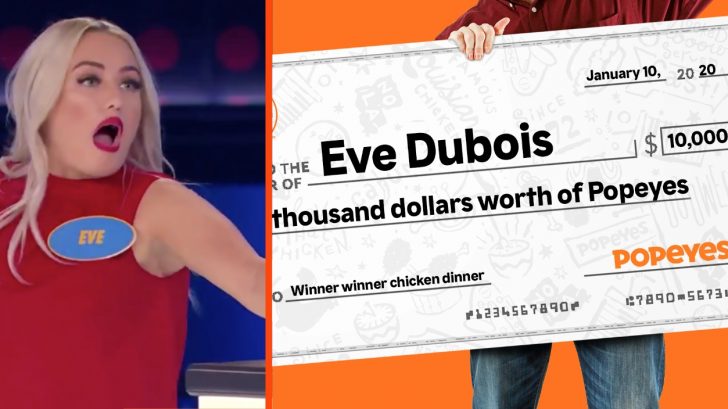 Eve Dubois from Manitoba Canada missed her chance at winning $10,000 for her family and embarrassed herself on national TV by giving the wrong answer to a question asked by Canadian Family Feud host, Gerry Dee.

It was the last question of the game, and they only had one shot to get it right. The question that was asked was “name Popeye’s favorite food.” Very confidently, Eve answers, “CHICKEN” and does a funky little dance thinking he was talking about the restaurant. However, he was not. Gerry was talking about the cartoon character and the answer was actually “spinach.”

Everyone looks up to the board waiting for the answer to appear and all the Dubois family got was a big X. Gerry then looked over to Logan Tomlin, from the opposing family who swiftly answered “spinach Gerry” and won the $10,000.

“I thought you meant Popeyes Chicken,” Eve said to Gerry before returning back to her family’s podium.

Everyone went home, but the video of Eve saying that went viral. A few days later Popeyes Louisiana Chicken publically tweeted Eve a picture of a $10,000 check addressed to Eve saying, “Our survey says you got that right. DM us to claim your $10,000 worth of Popeyes.”

Popeyes loved her answer so much they literally gave her $10,000 worth of free chicken, which she happily accepted. It went from being a disappointing moment for Eve to ending very well for her.

Watch The Family Feud Special Below