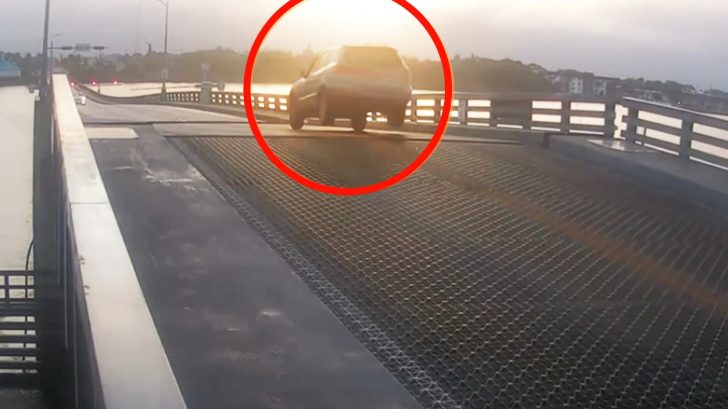 Florida officials are looking for a man after he smashed through a traffic arm guard and then jumped a rising drawbridge like something you’d see out of a movie.

The footage was captured by the bridge’s security camera on Main Street Bridge that crosses over the Halifax River. Police said it happened just before 8 o’clock in the morning and the driver was driving a second-generation Hyundai Santa Fe.

The video showed the driver speeding up to the traffic arm and driving straight through it. The arm shattered the glass and left an imprint from one side of the windshield to the other. That didn’t stop them, though.

A driver jumps the Main Street drawbridge as it’s going up. Driving experts say it’s illegal and could be deadly. Story at 10pm.#Fox35 ⁦@fox35orlando⁩ pic.twitter.com/1sSwrlM7Pg

He was on the phone and hitting the gas. Wherever he was going, it must have been important because he didn’t slow down and continued driving up the drawbridge, even after it had already risen a few feet.

Obviously, investigators are looking into who the driver was but he’s not the only one. The Daytona Beach Police Department said last month another driver did the same thing and over the same bridge, but they did it on a motorcycle and it was during the start of Bike Week.

Hear More About The Man Jumping The Bridge Below