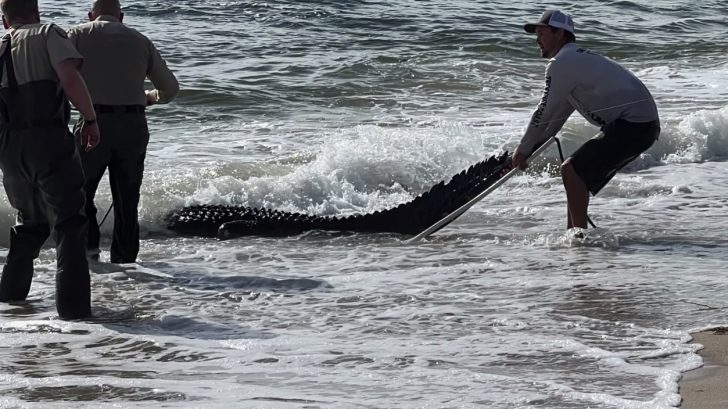 The City of Delray Beach in Florida released a statement and a video clip showing pictures of a massive alligator they had to remove after it wandered across the road and onto the shoreline.

City of Delray Beach, Florida Government, shared on Facebook, “Why did the gator cross the road? To get to the beach, of course!

The incident happened on Oct 12 and Florida Wildlife Commission, as well as Florida Fish and Wildlife received several calls about the alligator being a nuisance. A FWC trapper was then contacted to quickly drive out to the location to remove the gator.

Pictures from the video show City of Delray Beach, Florida Government Facebook page showed wildlife trappers pulling the gator by the tail from the ocean onto the beach and then tapping its mouth shut so they could properly transfer it to a place where it wouldn’t be a danger to beachgoers.

While the American alligator prefers freshwater lakes, slow-moving rivers, and wetlands, they are occasionally seen in the ocean and salty rivers in Florida.

The goal of SNAP is to proactively handle alligator threats in urban areas while also conserving the animals in areas where they naturally live.

SNAP often uses contracted nuisance alligators and trappers throughout the state to remove reptiles that are believed to pose a threat to people, pets, or property.

City of Delray Beach, Florida Government, shared on Facebook, “People with concerns about an alligator should call FWC’s toll-free Nuisance #Alligator Hotline at 866-FWC-GATOR (866-392-4286), and we will dispatch a contracted nuisance alligator trapper to resolve the situation.”

See Photos Of The Alligator Being Removed In The Video Below