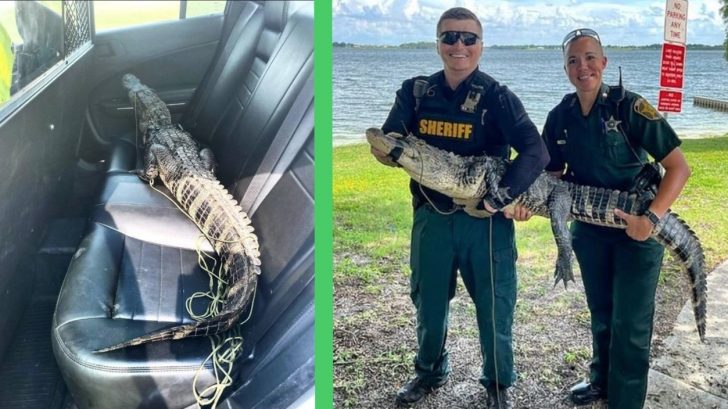 Polk Country Sheriff’s Office shared a photo on Twitter of an alligator in the backseat of their police cruiser roped up and arrested after getting into some trouble.

The Sheriff’s Office said the alligator was five foot five inches long and was found on a local resident’s porch. Deputies Hardy and Ferguson apprehended the reptile and transported it from Eagle Lake to Lake McLeod and released it.

“They were sure to say “see ya later,” Polk Country Sheriff’s Office jokingly wrote on Twitter.

Wildlife officials say that there has been an increase in reports on alligators due to it being mating season, which starts in May or June. At the end of June and beginning of July is when the female gators tend to lay their eggs.

They typically lay anywhere from 32 to 46 eggs and the incubation period lasts about 60 to 65 days. According to the Florida Fish and Wildlife Conservation Commission, the eggs will hatch in late August or the beginning of September.

Not to be outdone by a kitten rescue, Deputies Hardy & Ferguson apprehended this 5.5 foot intruder from a family’s porch in Eagle Lake yesterday & relocated him to Lake McLeod. They were sure to say “see ya later.” #gatorpatrol #onlyinPolk #onlyinFL #welivehere pic.twitter.com/skiITnjD5P

The largest American alligator ever recorded in history was in Louisiana and measured 19 feet two inches.

The average weight of an adult American alligator is about 790 pounds and the average length for one is 13 feet. Florida wildlife officials have removed many big gators from many properties and below is a video showing 10 gators that have been removed from pools. Click below to check it out.