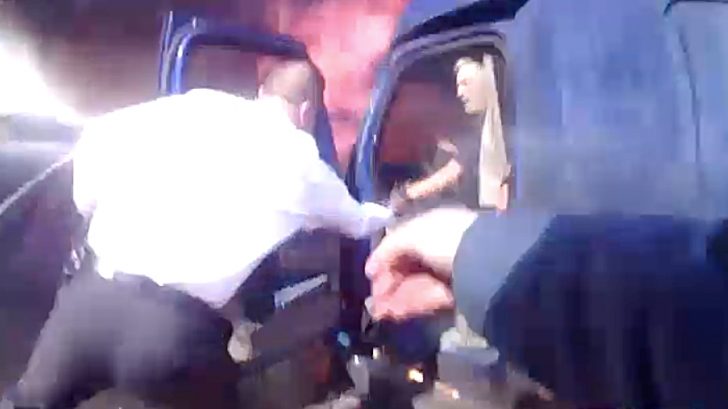 State trooper Robert Tarleton had his chest camera recording a vehicle stop on Interstate 289 in Bridgewater Township, New Jersey when an 18-wheeler truck drove past them and crashed into a guard rail.

Realizing that he had bigger priorities, Robert quickly gave the man his license and registration back and told him to “get out of here.” He ran back to his police cruiser and immediately grabbed his radio to report what just happened while he drove over to the crashed truck.

As he pulled up to park he noticed flames on the truck so he called in to tell headquarters that fire and emergency medical services personnel needed to come to the scene. The officer then got out and runs over to the driver’s side door where another start trooper was arriving at the same time to check on the truck driver.

Both troopers found the man dazed and screamed at him to “get out of the truck” as they pulled him out and dragged him to the other side of the road. While they were doing this the truck exploded making a loud bang, becoming fully engulfed in flames.

The man was laying on the road and Robert said, “The fuel tanks going, we got to get back,” so they both picked the truck driver up and move him to a safer place. KSL reported that the man only received minor injuries and the crash is still under investigation.

Troopers Pull Man from Fiery Truck Seconds before it Explodes Bridgewater Township, N.J. – Two New Jersey State Troopers pulled a man out of a burning tractor-trailer on Interstate 287 in Bridgewater Township, Somerset County just seconds before it exploded. On Monday, March 2, at approximately 3:35 p.m., Trooper Robert Tarleton was speaking with a driver on a motor vehicle stop northbound on I-287 at milepost 20 when a nearby tractor trailer ran off the right side of the road in the express lanes, striking the guardrail and bridge abutment before becoming engulfed in flames. When Trooper Tarleton heard the impact and observed the crash, he immediately returned the driver’s credentials and ran back to his troop car to request for fire and emergency medical services personnel to respond to the crash. As he drove to the scene, Trooper Tarleton calmly provided an update to dispatch before exiting his vehicle and sprinting to the burning tractor-trailer. As he approached the truck, State Police Lieutenant Edward Ryer, who was on his way home from work when he witnessed the crash, was out of his vehicle attempting to rescue the driver from the cab. Trooper Tarleton and Lieutenant Ryer then worked together to pull the driver from the burning cab, dragging him to safety, seconds before it exploded. The driver sustained minor injuries in the crash and was transported to Morristown Medical Center for evaluation. The cause of the crash remains under investigation.