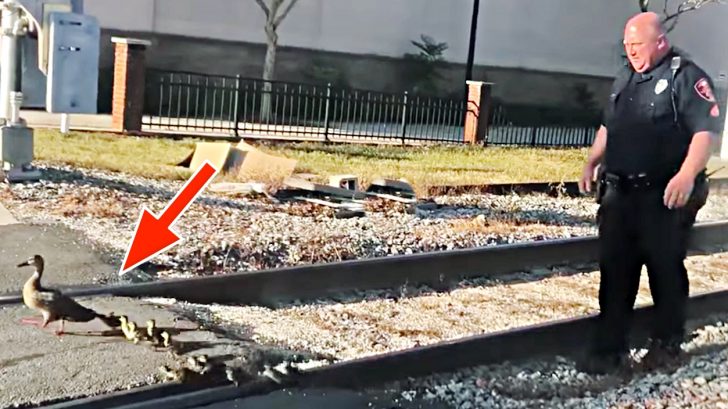 Spring is notorious for producing copious amounts of baby animals, and spring in Florida was no exception.

Officer Bailey of the Lakeland Police Department in Lakeland, Florida, was on patrol when he noticed a mother duck working hard to escort her dozen babies down the street. Concerned for the safety of the mother duck and her little ones, Officer Bailey stopped traffic by pulling his patrol car into the road, ensuring that mom and her babies would not be harmed.

In a Facebook post, the Lakeland Police Department stated, “Since they were in the middle of the street, Officer Bailey pulled his patrol car behind the family to ensure they would safely make it down the street.”

Stopping traffic was a noble deed on its own. However, Officer Bailey took a step further to see it through. He decided to pull over, leave his patrol car, and walk alongside the sweet mama duck and her ducklings to ensure they made it safely to their destination.

Of course, the duck family took a few twists and turns on their way to the pond, as ducks tend to do, crossing railroad tracks, going up steps, through parking lots, and across streets.

The officer followed the ducks until they made their way to the pond, hopping into the cool water, one after another. Once the duck family was peacefully swimming in Lake Mirror, Officer Bailey returned to his duties.

Watch the adventurous ducks and the thoughtful officer below.

A Hop, Skip, and a Waddle to Lake Mirror!

Earlier this morning LakelandPD Officer Bailey was on patrol when he noticed a mother duck and her 12 ducklings walking from South Florida Ave down Pine Street towards the station. Since they were in the middle of the street, Officer Bailey pulled his patrol car behind the family to ensure they would safely make it down the street. But, as you will see from the video, they made a few detours and hit a couple of barriers, a tad too big for little webbed feet. Officer Bailey walked alongside the family through each twist and turn, making sure they got to Lake Mirror safe and sound for a cool dip in the water. Even during times of uncertainty, there are always things around us to smile about! Thanks Officer Bailey for taking care of these cuties.City of Lakeland, FL – Government City of Lakeland Parks & Recreation