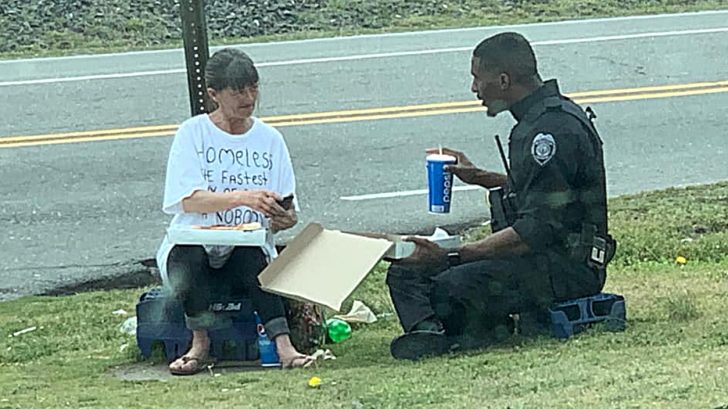 Officer Michael Rivers from the Goldsboro Police Department in North Carolina was captured on camera sitting on the side of the road with a homeless woman eating pizza and it’s warming hearts everywhere.

Officer Rivers was patrolling the neighborhood when he spotted a homeless woman wearing a shirt that said “Homeless. The fastest way of becoming a nobody.” Rivers knows many of the homeless in the area but this lady was not one of them and that shirt hit him in a soft spot.

He slowed down in his police cruiser as he drove past her and they both made eye contact with each other. As he continued to drive away he said something kept telling him to go back so he turned around and drove back to her.

As he pulled up he rolled down his window and asked if she had eaten today, she said no. He then pulled off to go grab some pepperoni and cheese pizza at a nearby store and came back to sit down with her to eat. They spent a good 45 minutes eating and talking about the things they’ve gone through.

The woman said her name was Michelle and she had a 12-year-old daughter and a 23-year-old son. Her husband was homeless too and was standing across the street as they spoke. Someone passing by took a picture of them and then later posted the photo to her husband’s Facebook.

This picture got a lot of praise and attention and so far has been shared by more than 4.3 thousand people. Many leave comments on how awesome it was of Officer Rivers to go out of his way to do that. Check out the comments and the post below.