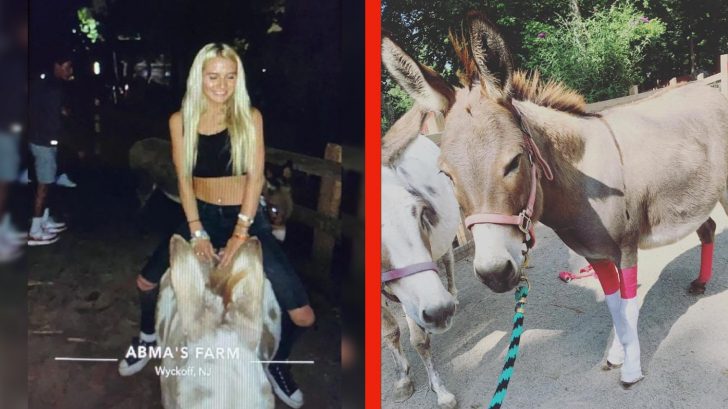 Authorities have now identified multiple people who were involved in a trespassing and animal abuse case after more than seven teenagers broke into a New Jersey farm and began riding the animals against their will.

The teenagers allegedly broke into a Bergen County farm and petting zoo after 11:30 p.m. Once inside, they “rode donkeys, abused a miniature horse, and left animals shaken and skittish” DailyVoice.com reports.

The teens also recorded their misdeeds and shared them on popular social media app Snapchat, which is how police were able to identify some of them.

Resident Jimmy Abma caught the teens in the middle of the act of abusing the animals and trying to steal tables, chairs, and other things from behind Abma’s Farm. He then later was able to get a photo of some of the trespassers which showed a blonde girl riding a donkey named Daisy.

According to a Facebook post by Abma’s Farm, the family says that the people who broke into their petting zoo were riding animals that should never have been ridden and explain how the situation unfolded after they became aware of the trespassers.

“Our farm was broken into last night around 10 pm. Trespassers broke into our Barnyard Petting Zoo and disturbed our animals. They opened gates and rode our miniature donkeys, who should not be supporting that much weight. One person took a Snapchat of another person riding our mini donkey and applied the Abma’s Farm geofilter.”

“After a concerned party alerted us to the Snapchat, we caught two other trespassers trying to steal- when we called the police, the two fled the scene.”

Afterward, the farm goes on to explain that they are a working farm and that the farm is the livelihood and home to four families. Additionally, the safety of the trespassing teens and their animals were both put at risk, leaving many of the animals shaken.

Family members were up past 2 a.m. trying to return the farm to its previous state and unfortunately have not been able to find a duckling and a rabbit. Furthermore, they had to remove lipstick that had been applied to one of the donkeys.

Abma says that he plans to follow through and make sure that everyone is held accountable, adding “These kids have to deal with what they did.”

So far, police are working to identify and contact all parties who were involved. Each could be charged with a variety of crimes, depending on their involvement.

See the full post from Abma’s Farm below along with a local news report.

From the bottom of our hearts, we want to thank our community for showing us an outpouring of love and support after…