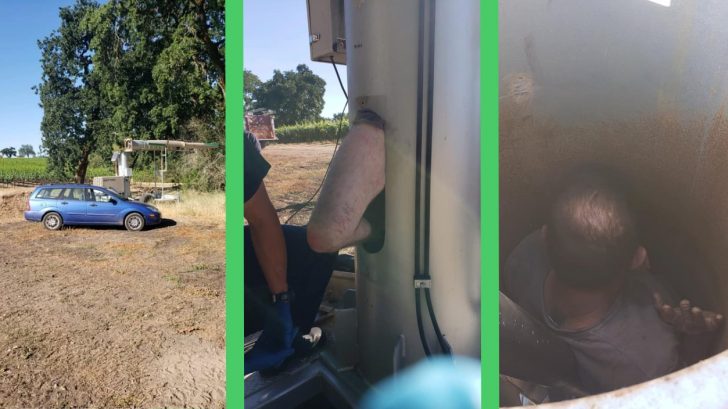 The Sonoma Sheriff’s Office released a public statement on Facebook showing photos of a man found stuck in farm equipment for two days.

Sonoma Sheriff’s Office was called out to a private property on 2800 block of Piner Rd after a local spotted an unfamiliar car parked there for too long. When deputies arrived on the scene, they found the car but nobody was in sight.

As they checked the surrounding area, they spotted a hat laying on a piece of farm equipment and walked over to investigate. Once they got a little closer, they saw a man’s leg sticking out of the side of the equipment.

They were astonished to find him still alive and they managed to pull him out.

Sonoma Sheriff’s Office said on Facebook, “The occupant of the vehicle had, inexplicably, decided to climb into the shaft of the vineyard fan and became completely stuck inside the shaft. He had been stuck there for two days before we found him.”

After being question by police, the man said he climbed onto the shaft because he likes to take pictures of farm equipment. However, after investigating, they found the man had more methamphetamine in his possession than camera equipment.

The reason why the man climbed in there is still a mystery, according to the deputies.

Sonoma Sheriff’s Office said, “We elected to not arrest him as he required medical treatment after his unintended multi-day stay in the fan shaft. The Sheriff’s Office will be recommending charges of trespassing and drug possession, as well as violations of both his probation case and the pending case for which he is currently out of custody on pre-trial release.”

Luckily for this man, someone called in to report his vehicle on the property, otherwise, the man would have certainly died there. Authorities say he is expected to make a full recovery and hopefully he learned his lesson from his experience.