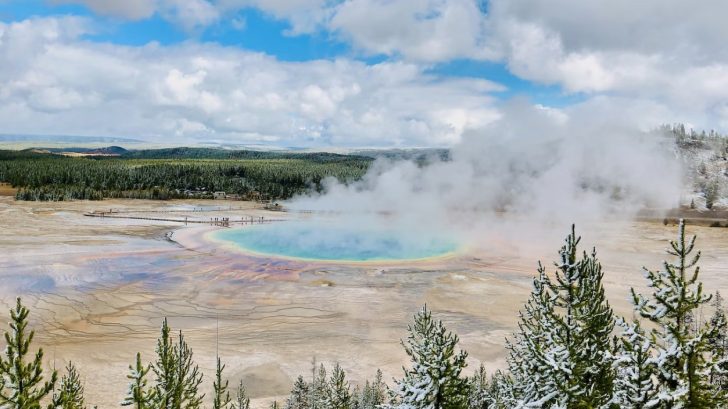 Yellowstone National Park officials said that an investigation is on its way after a human foot was found floating around in one of the park’s hot springs.

A Yellowstone employee spotted part of a foot in a shoe and reported it to the authorities on Tuesday (Aug 16). The foot was found at the hot spring known as the Abyss Pool which prompted park officials to temporarily close the West Thumb Geyser Basin and its parking lot.

Police believed the human foot is linked to a death of a person who was suspected to have died in July. Foul play is not believed to be the reason, however, they did not disclose any further details on the death or who it was that died.

The Abyss Pool is located west of the West Thumb of Yellowstone Lake and is on the south side of the southern loop through the park. The hot spring is a scary 53ft deep body of water boiling at a high temperature of 140F.

In the Abyss Pool, the superheated water cools as it reaches the surface, it sinks and is then replaced by hotter water from below. The cycle they say prevents the water from reaching a temperature that could create a geyser.

Park officials say that while the hot springs are some of the most famous attractions at the park, they can also be the most deadly.

According to the park’s website, “Hot springs have injured or killed more people in Yellowstone than any other natural feature.”

Since 1890, there have been at least 22 people reported to have died from a hot spring related injury. Signs in the park and officials warn people to stay on the boardwalks and trails in thermal areas where some of the pools and springs have a thin, breakable crust covering acidic water below.

The most recent death that occurred in one of the hot springs was in 2016 when an Oregan man fell into a boiling, acidic spring and “dissolved.”

More On The Story Below