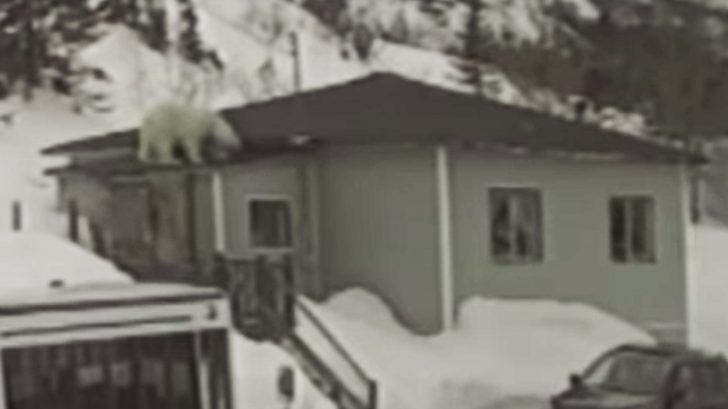 Kenneth Keats was at his parent’s home in Newfoundland, Canada when he filmed a full-grown polar bear almost falling through the roof of the neighbor’s house after it had climbed on top of the home.

Kenneth said their neighbor, Bobbi Stevens, was inside the home when he started filming the polar bear from across the street, walking on a snowy embankment in the backyard.

It curiously walked around the property smelling things before slowly climbing on top of the rooftop from the embankment.

Bobbi told CBC that her roof is “not that strong” and if there was “one less nail” holding things together, the bear might have fallen through. Fortunately, that didn’t happen.

However, neither Bobbi nor her dog realized the bear was on their roof until it jumped back down to the snowy ground. After that is when the dog started barking as if there was someone at the door.

Bobbi said, “I opened the top part of the door and looked out, and when I looked up on the bank above my steps this polar bear was looking me in the face”

The bear started to move toward her but she quickly shut the door and retreated back into the safety of her home.

Watch Part 2 Of The Polar Bear Video Below