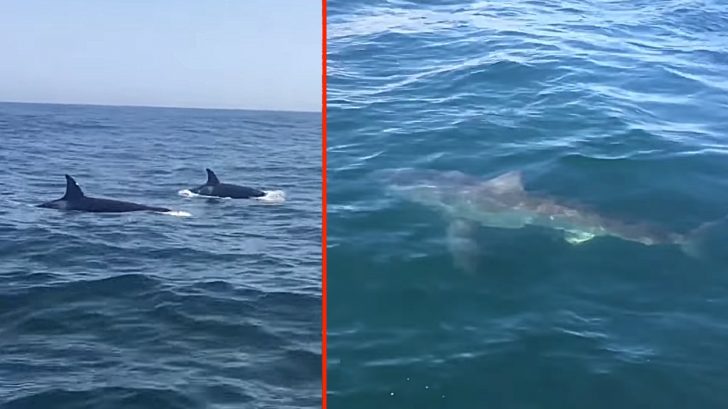 A massive great white shark was spotted being chased by a pod of killer whales swimming off the coast of South Africa and one man happened to be around to film it.

Donavan Smith was leading a boat tour south of Knysna, which is about 250 miles east of Cape Town when they witnessed the killer whales jumping out of the water. As they got closer to see what was going on they noticed the killer whales were hunting another apex predator, a great white shark.

“This is amazing. This is special stuff,” Donavan said in the video below. “There’s a big great white here in the water. They come and they hunt great whites.”

As the folks on the boat got closer to the action, Donavan began to film. The shark started swimming towards the boat as if it was looking for a place to shelter itself from the whales. The great white was about half the size of the boat.

He went on to speak about how the killer whales bite the tails off the great whites so they can’t swim anymore. However, it appears they’re not hunting the sharks because they’re hungry because they usually just bite them once and then let them die. It appears the whales are just territorial and are killing the shark because it’s on their turf.

In 2015, many shark carcasses were found in False Bay which is off the coast of Cape Town with just their livers missing and appeared to have been attacked by killer whales. In 2017, five carcasses of great whites were found with similar bites. In 2018, great whites became completely absent from the water and it stayed like that for 18 months straight. Experts believed that killer whales have been dominating the area.