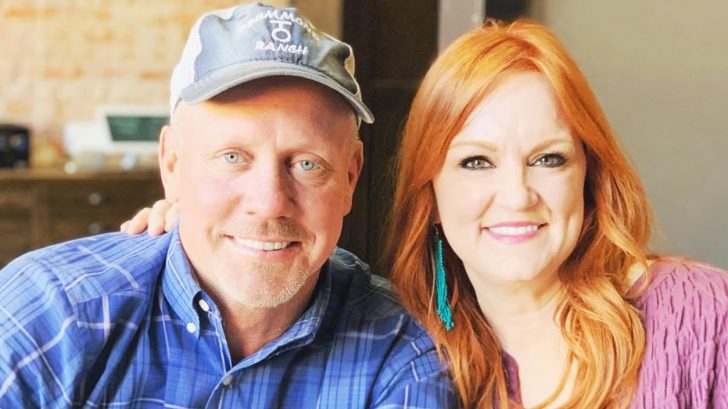 Ree Drummond‘s husband, Ladd, and nephew, Caleb, were involved in a bad accident on the family ranch in March. Ladd broke his neck in two places, and underwent surgery to repair one of the fractures.

Since the other fracture couldn’t be operated on, Ladd has been wearing a neck brace 24/7 while it heals on its own. He dutifully wore the brace over the course of the past two months in the hopes he’d be able to take it off to walk his daughter, Alex, down the aisle at her May 1 wedding.

Although Ladd was kicked in the head by a cow just days before the ceremony, it didn’t set him back. Ree shared an update on her Pioneer Woman blog about his recovery. She also revealed if he was able to take his brace off for Alex’s wedding.

Of course, if you’ve seen some of the beautiful photos from Alex’s wedding day, you already know that Ladd wasn’t wearing his brace. Ree clarified that he only took it off for a few special moments, and wore it the rest of the time:

“…the doctor said that his neck is about halfway healed,” Ree wrote, “and that Ladd could take off his brace for the brief moments at the wedding that mattered. (But only if he put it right back on!)“

Ree said Ladd took off his brace for photos and when he walked Alex down the aisle. She said a few people have asked why he looks so “stiff” in the pictures, so she explained:

“…it’s more that he’s making a concerted effort not to turn his head or move his neck much…He’s not in any pain at all, he’s just trying to keep his neck still.”

Ladd also took his brace off for a few other moments, including his father-daughter-dance with Alex. They danced to “Cowgirls Don’t Cry” by Brooks & Dunn and Reba McEntire.

Ree said she wasn’t entirely comfortable with the idea of Ladd taking the brace off for the dance, but knew how much it mattered to him:

“He wanted to make sure he had a few photos in each of the important moments that didn’t include the brace, and while I considered arguing with him, I realized it was his call,” she said.

Even though it wasn’t ideal for Ladd to have to wear a neck brace for most of the wedding, Ree knows things could have been much worse. “The wedding was meaningful and special—even more so because it wasn’t lost on any of us how different Alex’s wedding day could have looked,” she said.

We know Ree is counting her blessings and thanking her lucky stars that Ladd was able to be there for their daughter’s big day. Learn more about the gorgeous wedding and reception by watching the video below.

It’s so nice to hear about how well Ladd is doing, and we wish him a speedy recovery!