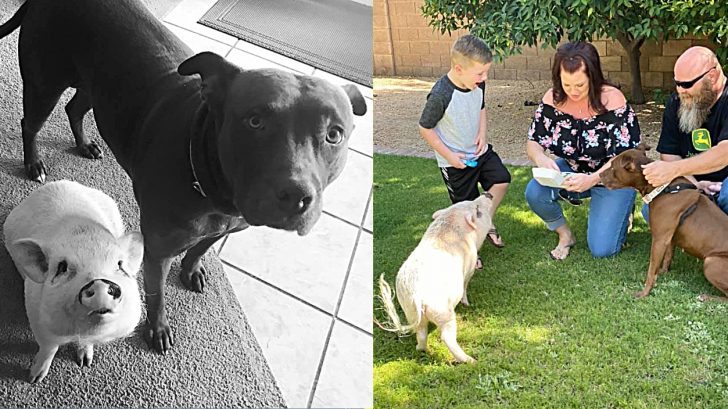 Penelope Rose the potbellied pig and Ruby Sue the pitbull dog have lived together their entire lives, however, recently they were on the verge of being separated after their owner suddenly passed away.

‎On June 3rd, 2020, Jessica Sitter Overlock‎ posted an emotional Facebook message to the public pleading for help on finding these two a home together. She said they were her friend’s animals who passed away and left the pair needing a loving home where they would both be accepted.

She let everyone know that Ruby is incredible with people, kids, and her pig, but doesn’t know how she would be with other farm animals. She knows Ruby doesn’t really get along with other dogs and cats so the new home needed to not have any pets.

Penelope is incredibly smart, according to Jessica. The pig is house trained so she will not potty inside but likes to go on walks outside just as a dog would. Both Penelope and Ruby have lived their whole life indoors and are well behaved.

Upon their owner’s death, they got separated and were very upset about it. Ruby was still at her owner’s house being taken care of by Jessica while Penelope was at the daughter of the homeowner’s house. Pigs are known to grieve and go down quickly when they lose a companion so Jessica was afraid to keep them separated for too long.

“That’s one thing I promised the little girl who lost her dad, that we were going to find a home together forever,” Jessica said, according to Animal Rescue.

On June 6th, 2020 Jessica updated everyone that Ruby and Penelope have found their forever home together. A local family from Mesa, Arizona adopted them, which gave the previous owner’s daughter an “overwhelming sense of comfort” knowing they were going to a loving home together. Here’s a picture of them below!

Video News Report On Ruby and Penelope Below