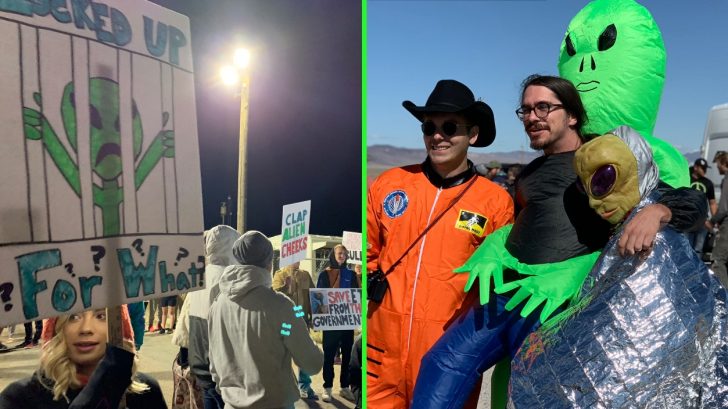 Memes were made and after a while, the event’s creator came forward after its popularity really picked up.

Matty Roberts told CNN that he created the event as a joke after hearing Area 51 expert Bob Lazar on Joe Rogan’s podcast. Lazar has publicly claimed that he worked on alien spacecrafts during his time as an employee at the base.

He created the Facebook event as a joke to see what kind of memes people would come up with.

“I waited for like three days and there were like 40 people and then it just completely took off out of nowhere. It was pretty wild,” Roberts said.

While he made it clear it was entirely satirical, the Air Force and the FBI each released a statement, and visited him at his home.

Air Force spokesperson Laura McAndrews told the Washington Post that they are prepared to stop any threat to the Area 51 facility.

“The U.S. Air Force always stands ready to protect its assets,” McAndrews told the publication, adding that the site is “an open training range for the U.S. Air Force, and we would discourage anyone from trying to come into the area where we train American armed forces.”

According to ABC 15, Roberts said “The FBI showed up at 10 a.m. and contacted my mom, and she calls me like, ‘answer your phone the FBI is here. I was kind of scared at this point, but they were super cool and wanted to make sure that I wasn’t an actual terrorist making pipe bombs in the living room.”

Instead of actually storming Area 51, Roberts changed the event into a festival called “Alienstock” where people could come together at the gates of Area 51 for a celebration which, according to the updated Facebook page, will include “Nightclubs, Parties, Festivals, Meet & Greets and more.”

It’s been reported that around 100 people showed up Thursday night (Sep 19), with more expected to come Friday. Bud Light, who has their own Area 51 beer, is sponsoring the event. Well, the weekend has already begun, and yes…people actually showed up to “storm Area 51,” and we’ve got the photos to prove it.

Police have shown up as a precaution, and have arrested one man so far for indecent exposure, according to Mick Akers. The man allegedly urinated on the gate.

Lincoln County Sheriff’s Office said they arrested 1 man at the Area 51 gate this morning for indecent exposure, for peeing on the gate. Another was detained and released for attempting to go under the gate. #area51 #StormArea51 pic.twitter.com/SGOBNHUvaH

Check out the photos below.

A group of people and law enforcement at the back gate of Area 51 near 3 am. #area51 #StormArea51 pic.twitter.com/pMz90zRtyJ

A guard and a dog showed up from inside of the gate of Area 51. #Area51 #StormArea51 pic.twitter.com/YGrK6Rc43S

#StormArea51 is here, and while a few dozen people are outside the facility gate near Rachel, Nevada, no major incidents have been reported.Read more: http://bit.ly/2lZvlYs