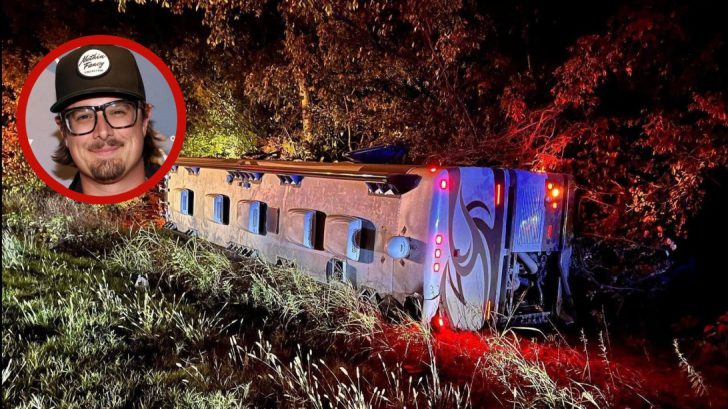 Country singer-songwriter Michael Wilson Hardy, best known by his stage name HARDY, was aboard his tour bus traveling west on Interstate 40 with three members of his crew early on the morning of October 2nd when the bus left the interstate at 70 mph. . The men were returning home to Nashville from Country Thunder in Bristol where they had performed earlier in the night.

HARDY shared news of the accident the following day on Instagram, saying:

“Following last night’s show, our tour bus was in an accident on our way home from Bristol. There were just four of us, including myself on the bus, however we were all treated for significant injuries,” the singer wrote, adding that he had been released from the hospital, but had been ordered to recover for a few weeks.

Few details surrounding the crash have been released, including the cause of the accident.

But, Tanner Gallagher, videographer and photographer for HARDY who was aboard the bus at the time of the crash, shared photos of the aftermath. Those photos included a look at the crashed bus and Gallagher’s injuries.

“….around 2:30am last Sunday, our bus ran off the highway at around 70mph flipping us into the woods. There were 4 of us aboard: our driver Ricky, our tour manager Noah who was asleep in his bunk, and me and Hardy who were up in the front lounge. Within what felt like 3 seconds, our bodies were thrown across the room knocking us all unconscious. By the grace of God, we all survived. My injuries included a shattered foot, a punctured lung, 4 broken ribs, and a fractured vertebrae in my neck,” Gallagher wrote.

Tanner noted that he was told by doctors that it was a miracle they survived, then shared that the thought made him reflect on his own life.

“I think about the times that i’ve spent worrying, stressed, upset, been less present or simply took for granted, and it kills me. I think about all the people in my life, family, friends, co workers, etc. and wished that I could have spent more time with them or somehow made them feel better in moments with something as simple and little as a compliment,” Tanner shared. “As scary and life threatening as this accident was, I’m glad I now have a better outlook moving forward and it’s only going uphill from here. I know this accident could have been a lot worse and for that i’m so grateful.”

It’s unclear exactly what injuries the other men suffered in the bus accident. Thankfully there were no fatalities.