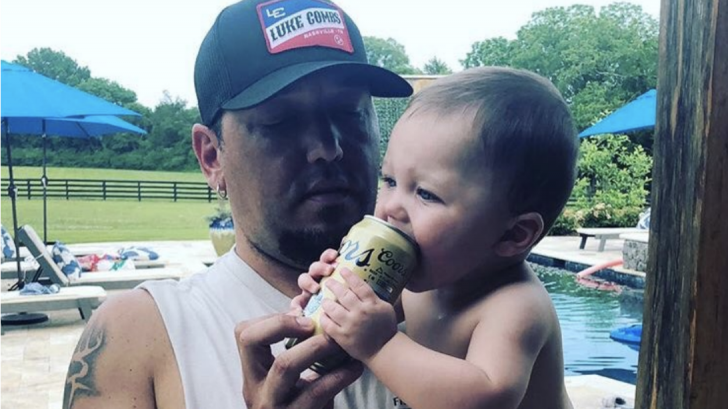 Jason Aldean knows how to get people talking! The 41-year old country star posted a photo to social media on Saturday that he was sure would ignite a fiery debate. Instead Aldean’s fans came out in full force to support the singer.

In the photo, Aldean is holding his 6-month old son Memphis who has his mouth on a beer can. “what can i say….. It runs in the family! #mybad #everybodychill #hedidntdrinkit? #butitsfunny#drinkresponsibly,” Jason captioned the photo.

Thousands of comments have been posted on the photo across all forms of social media, but they are overwhelmingly positive. In fact, most of the commenters agreed that a cold canned drink can bring relief to baby’s sore teething gums.

While the beer can in the photo appears to be unopened, it is indeed a common practice to rub alcohol on a baby’s gums to alleviate teething pain, a fact that numerous commenters pointed out.

He’s teething cold can Probably feels good on his gums…….. A true fan would know you would not feed your son beer…..

Looks like he’s teething. The cold probably felt so good 🙂

When I was his age my mom put whiskey on my gums for teething.

The only criticism Aldean received about the photo was regarding his choice of beer.

I know he isn’t really drinking it. If he was he would be making bitter beer face from that nasty Coors.

Only one thing wrong. It should be bud light not a coors. Lol.

What do you think about the photo…and Jason’s choice of beer? Let us know in the comments.