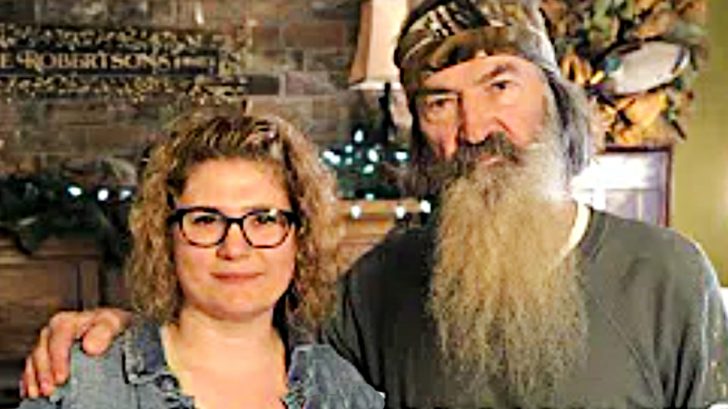 Phil Robertson, the patriarch of the Duck Dynasty family, and his wife, Miss Kay, have been married since 1966 and have built an empire together. They share four sons (Al, Willie, Jase, and Jep), and taught them to put their faith above all else.

However, Phil was surprised to find out that he was actually a father of five, not four.

In an episode of Phil’s Unashamed podcast, he and his sons revealed the shocking news. Phil has an adult daughter he was unaware of. As surprising as it may seem, considering Phil is a well-known follower of Christianity, he has not always lived a virtuous, Christ-like life, and in the past had been unfaithful to Kay.

In the 1970s, shortly before Phil turned his life around and became a Christian, he had an affair that resulted in the birth of a daughter who is now 45 years old.

On an episode of Phil’s podcast, Unashamed, Phyllis, Phil, Jase, Al, and Kay shared their experiences of finding out the news.

Phyllis is married with two adult sons and discovered that the father she was raised by wasn’t her biological father when her sons were gifted a DNA test and the genealogy results weren’t adding up. This led her and her two siblings to take DNA tests, the results showed that her siblings were actually half-siblings.

A deeper dive into her ancestry led her to believe that Phil was her biological father. She sent a couple of letters and got no response until she hand-delivered a letter to Jase at the family’s church.

When Phyllis walked into the church to deliver the letter she saw Phil leading the church service, she thought to herself, “How cool is it that the first time I’m seeing my dad, he’s preaching the gospel? That, to me, was like, that’s a cool dad.”

Yep, I have a sister. And she’s awesome. Listen to how my brothers and I found out by clicking link in my bio. God is good!

Once Jase and Al put together all the facts and felt as though Phyllis was sincere, they approached Phil and Kay with all the information. Phil agreed to take a DNA test, as did Phyllis, and they were a match! A plan for them to meet up was set in motion.

I always dreamed of having a big sister to take up for me against my big bro’s. Fast forward 41 years… I’m pumped Phyllis is here with us now. Love you big sis!

Phyllis admitted that she had heard of Duck Dynasty but never watched it until she discovered Phil was her father. She started to watch a couple of episodes before stopping because she didn’t want to have a preconceived notion of who her family was before meeting them.

Prior to traveling to Louisiana to meet her newfound family, she spoke to a few members of the family on the phone. However, Phil wanted to wait until they met in person, eye-to-eye before having their first exchange. When they met, they took time so that just the two of them could talk privately.

Phyllis shared that she had been warned that Phil was not very nurturing and to “be prepared.” However, she told him during the podcast, “I found you to be very nurturing.”

Phil recalled the moment saying, “I put my hands on her face and looked in her eyes,” and admitted he kept calling her “little girl” although she’s 45.

He also marveled at the name her mother gave her stating, “What’s interesting is what your mother named you, not telling you who your father is, but named you Phyllis…very weird.”

When meeting the rest of the Robertson family she admitted it was a little overwhelming but things never felt awkward when she met her brothers, Jase, Al, Willie, Jep, and the rest of the extended family for the first time. “It was just puzzle pieces clicking into place,” she said.

So good finding my long lost sister. Can’t wait to share life with y’all’s family. Welcome to the nuttiest family around. [link in bio to hear us tell the story]

Phil shared his feelings on the podcast saying, “Girl, you’re the best thing that ever came out my past, because up until she showed up, I had nothing good to say about what happened before I repented… I’m glad you found me, I’m glad I found you, all I have to say is ‘Welcome Aboard.'”

My daughter looked at Miss Kay and said, "What a gracious, kind, godly woman you are."⁣ ⁣ Phyllis, I'm glad you found me, and I'm glad I found you.⁣ ⁣ Miss Kay, I'm glad you stayed with me to see how it all worked out.⁣ ⁣ Meet Phyllis and hear more from Miss Kay on the latest episode of Unashamed on my YouTube channel. Link in bio.

What an incredible story!

Watch the full interview with the family below.