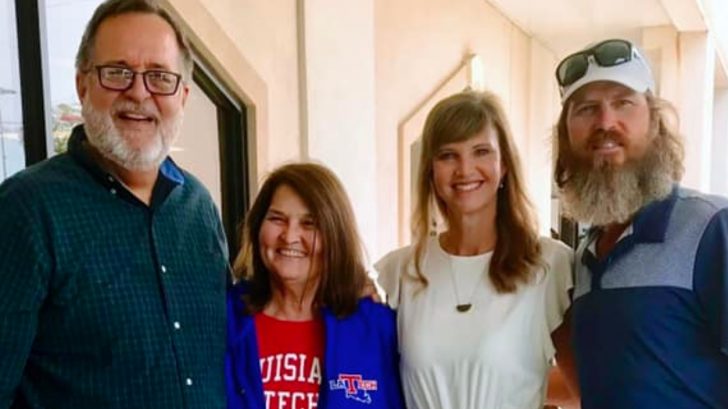 The woman who is possibly responsible for Duck Dynasty being on the air has passed away.

Janice Robertson Dasher is the younger sister of Phil and Si Robertson, and she is the person who famously helped Phil find God.

After Phil and his wife Kay had their first three sons, Alan, Jase, and Willie, Phil owned a bar where he spent most of his time drinking. Youngest son Jep was not born yet. Partly because of his drinking, he and Kay separated. His little sister Janice went to a preacher and begged him to help her brother find The Lord.

Phil spoke about this in his Unashamed Podcast on September 8.

“If you convert my brother, he’ll convert thousands,” Phil said Janice told the preacher. He continued, “My little sister is telling the preacher that. That’s what happened. I was converted.”

Now, Phil preaches the gospel for a living and has touched countless lives by the word of The Lord, just like Janice said he would.

Two-and-a-half weeks after Phil told this story, his sister Janice Robertson Dasher passed away at the age of 68.

According to Mulhearn Funeral Homes, she passed on September 25. Her service was held Sunday September 29. Al Robertson and her sons Zach and Grant Dasher officiated.

Her husband Gordon mourned her death in the early hours of September 25, revealing Janice suffered from Alzheimer’s Disease.

Jan went to be with her Father early this morning. I’m encouraged by so many who were touched by her life. Your words of…

She was beloved by all who met her, especially her nieces-in-law, Korie and Missy Robertson.

Korie Robertson wrote on Instagram, “Had she not been the passionate woman of God that she was, that never gave up hope on Phil and Kay and the boys, life for us would have been totally different. Willie and I would have probably never met, our kids wouldn’t be here. I can guarantee you Duck Dynasty would have never happened.”

Missy spoke very highly of Janice, who was actually her 4th grade teacher, and the role she had in Jase and Missy getting together. See the heartwarming story below.

I am convinced that if the Bible were written today, Jase’s Aunt Jan would be included as one of the great Bible…

Jase and the youngest Robertson brother, Jep, were two of the eight pallbearers.

Janice is survived by her husband Gordon, their children Melissa, Zach, and Grant, her brothers Tommy, Phil, and Si, nine grandchildren, and many nieces and nephews.

Our thoughts and prayers are with the Robertson family during their time of grief.

My little sister told the preacher, "If you convert my brother, he'll convert thousands."