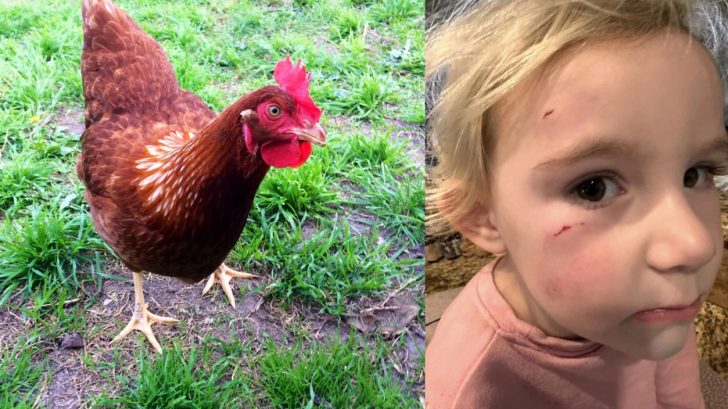 A Facebook post by Magan Schmidt has gone viral, in which she explains how her family killed, cooked, and ate their pet rooster, HeiHei, after he allegedly “attacked” her young daughter.

The post, which has since been deleted, included pictures of her daughter with bloody pecks to her forehead, cheek, and neck. The post gathered over 16,000 comments and 56,000 shares before getting deleted.

According to KidSpot, in the post, Schmidt wrote, “Well, it finally happened. Our mean ole backyard rooster, HeiHei, attacked the baby child!! We were SO lucky that he didn’t do any more damage than he did. Half an inch, and she would have lost an eye! Nevertheless, he got what was coming to him! Mama don’t play when it comes to her babies. HeiHei nuggets for dinner!”

One person said, “’It finally happened … so you were anticipating something bad happening yet, did nothing to prevent it… ok.”

Another commenter wondered, “Why even have a rooster if you’re not going to watch your kid around it?”

Another user, who claimed to have lived on a farm, questioned in a lengthy statement, “‘It finally happened’ really sounds like this isn’t the first time your child has had a negative interaction with this roo protecting his coop. If you knew it was an issue, why didn’t you do more to prevent it? Also to add, anyone that knows anything about raising chickens for livestock knows a full grown, adult cock is not food. At all. Protection is their only purpose.”

On the other hand, some Facebookers defended the protective mom’s handling of the situation. One user said, “We live in a soft world. If you didn’t grow up on a farm or live like this, don’t comment. It’s life. Get over it.”

Another commented, “It’s pretty easy to tell in the comments who has never been around mean roosters before! Some birds make better nuggets.”

The incident has raised important questions about parenting, animal welfare, and ethical considerations when it comes to raising livestock.

It is essential to ensure that the safety of both children and animals is maintained and to take necessary precautions to prevent such incidents from happening in the future.

Learn How To Deal With An Aggressive Rooster Below