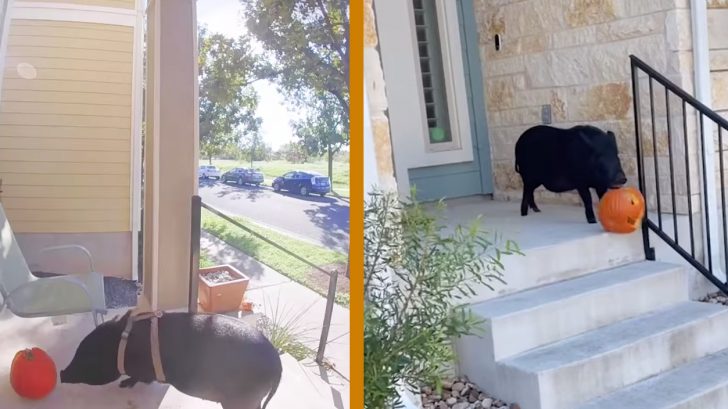 Carlton, the domestic pig has grown quite a name for himself after escaping his enclosure around Halloween one year and eating all the neighbors’ pumpkins in their yards.

Carlton’s owner, Amanda said that he is quite the escape artist.

She said no matter what she tried to do to make his enclosure secure, the pig would figure out a way to open it and would be seen on home security cameras from multiple neighbors smashing and eating their decorative pumpkins.

Amanda said she would change his locks and leashes but he just kept getting out. She would get calls and text messages from her neighbors reporting that Carlton was in their yard doing what he does best.

It got so bad that she would post on Facebook letting her community know who the culprit was, apologizing for it, and saying she would replace any pumpkin that he ate.

Fortunately, no one was ever really upset with him about it and she said it kind of became the running joke of the neighborhood. People started wanting to give their pumpkins to him and would leave them on Amanda’s porch.

Carlton ate so many pumpkins in the front yard and would use his nose when he would eat to smear crushed pumpkins around in the dirt, basically planting his own garden.

To Amanda’s surprise, when the following Spring came along, her entire front yard sprouted into a pumpkin patch.

As neighbors would drop by, Amanda started asking them what they did with their pumpkins after Halloween was over and most people said they just threw them away or used them for composting.

The next Halloween she asked all the neighbors in the area to give her their pumpkins when they were done with them so Carlton had plenty to eat. However, she didn’t expect to receive so many and ended up getting way more than Carlton could eat on his own.

Over 2,000 pumpkins were donated to Amanda and with so many, she decided to take them to the Central Texas Pig Rescue to give the excess pumpkins to the pigs.

The shelter is the same place where she got Carlton from when he was little and the pigs there were very happy to have the pumpkins.

It was such an uplifting charitable event that they started doing it every year, and they still continue to do it till this day, except now it goes by the official name, The Pumpkin Drive.

Amanda says that if it wasn’t for Carlton escaping in the first place and eating the neighbor’s pumpkins that the pumpkin drive wouldn’t even exist.

Carlton not only brought joy to his neighborhood and got rid of their pumpkins for them, but he also made it to where now all the pigs at the rescue center receive an extra treat each year. It’s a beautiful thing how it all worked out.

Watch The Video Below To See Pig Steal Pumpkins