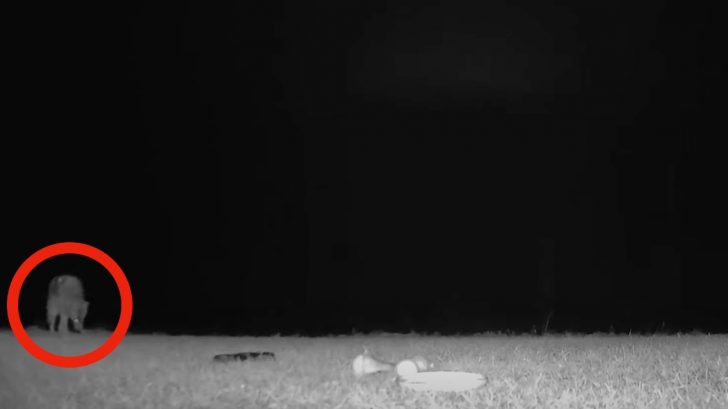 Brian Chisholm lives in the rural lands of Portland, Maine, and was a bit confused after waking up multiple mornings to notice his dog Sancho Panza’s toys were missing from the backyard.

Brian said he didn’t think too much about the toys disappearing at first but after they continuously kept coming up missing, he started to wonder where the toys were going and who was taking them.

One day he searched around the property trying to find the toys and eventually located them piled together in a nearby field, which…was relieving to find, but still very mysterious how they got there.

After racking his brain over the situation for a little bit, he decided to just set up a video camera to see if he could possibly capture footage of the culprit stealing.

At exactly 10:14pm (April 1), video footage showed an adult coyote sneaking into the yard and moving toward the toys. The coyote went straight for the peanut butter toy and quickly grabbed it up in its mouth.

Actually playing with the toy for a couple of seconds, the coyote threw it up into the air and let it hit the ground before picking it up again and taking off back into the night, most likely, headed for the nearby field.

The coyote was caught red-handed snagging Sancho’s toys and Brian finally got the bottom of it.

Watch the video Brian took of the coyote below!