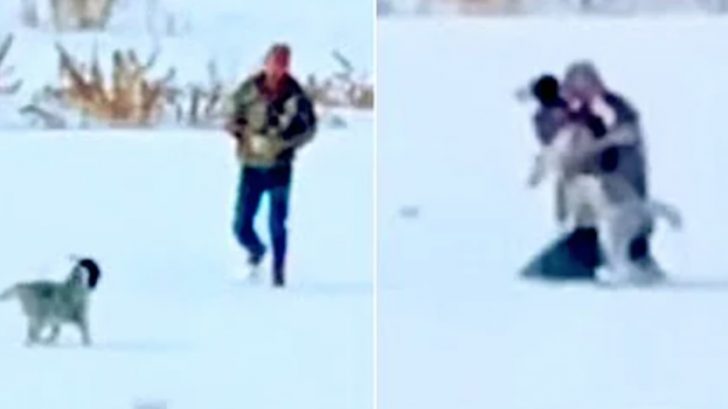 68-year-old Roger Jacobs broke down to his knees and cried after he lost his dog Salty for a whole week and finally reunited with her again in a snowy field.

Roger, who lives in Shepherd, Montana said the whole ordeal started when his beloved pet escaped an unlatched gate on December 22 to run off into the woods and chase what he believes was a deer.

“It made the Christmas holiday a little less bright,” his daughter, Becky Anderson, a basketball coach, said. “We spent day and night driving around looking for her, tried tracking her footprints in the snow. We initially believed she was chasing deer and then disappeared. As my dad would describe it, ‘he was gut shot.'”

He, his family, and friends called, whistled, posted online, and searched for the dog for nearly seven days and had all about giving up hope they would find her until they got a call from a friend who believed they had spotted her.

Their friend Bill Lepley told Becky over the phone that he spotted a dog by a river in Huntley, Montana that could have been her. Becky piled herself and her two children into her car to drive out and see if it was true.

“I tried my best not to get my hopes up especially knowing Salty had been gone for a week in below zero temperatures,” Becky said of the call. “When we pulled up, we all three barrelled out of the car jumping up and down,” she said. “With one look, we knew it was her.”

Bill put Salty in his vehicle and drove her back to her home to meet Roger. When they got to the family’s property line, he let her out of the vehicle into a snowy field to reunite with her owner who was walking towards her on the other side of the field.

Becky said, “My dad was blowing his whistle until he could see her. You can see him tuck his phone back in his pocket, put his gloves on, and fall down to his knees with tears of joy.”

Salty had a wound to her front leg and some wear and tear to her paws after being out in the snow for nearly a week, but overall, she was in good health.

“The wound on her leg is healing up nicely, and she has settled right back into her normal way of life,” Anderson said. “She lost about ten pounds through the ordeal, but other than that, you would never know anything had happened.”

Watch Footage Of The Reuniting Below